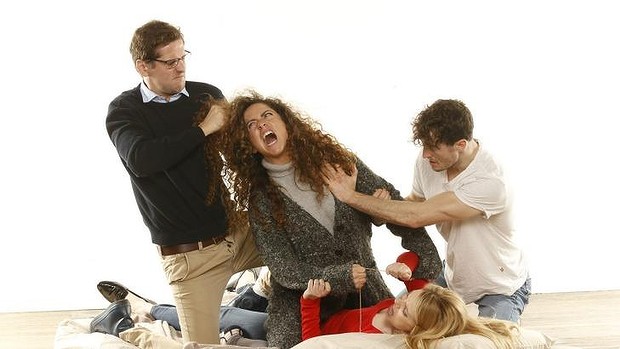 To that list you can add American playwright Joshua Harmon’s Daphna Feygenbam, the volatile, wild-haired and religiously devout antagonist of his 2012 comedy Bad Jews.

In 100 non-stop minutes, Harmon’s claustrophobic four-hander focuses on the aftermath of a funeral – that of beloved Jewish family patriarch and Holocaust survivor Poppy, a momentous emotional and symbolic event that has drawn three of his grandchildren back to Manhattan.

Only two of them – Vasser College student Daphna (Maria Angelico) and slacker sophomore Jonah (Matt Whitty) made it to the ceremony, however.

Jonah’s elder brother, Liam (Simon Corfield), having dropped his smartphone from a ski-lift in Aspen, shows up late. Worse still, he has his blond, blue-eyed girlfriend Melody (Anna Burgess) with him and all, somehow, have to bunk down on inflatable mattresses in Jonah’s very smart but very small Riverside Drive studio.

A plentiful amount of tension to bring the feisty Daphna to the boil, you might imagine. But there’s more.

Daphna is consumed by the notion that because she is the most observant Jew in the family, she is the rightful heir to her Poppy’s chai – a gold talisman inscribed with the Hebrew characters for “life”, which he kept under his tongue while imprisoned in a Nazi concentration camp. After the war, it served as Poppy’s engagement ring.

But Liam has very different ideas about the chai’s significance and has another plan for it, one which Daphna regards as not just an insult to her family but as an affront to Jewish faith and identity.

A comedy that flares with emotion and ideas, Bad Jews is seldom less than gripping and frequently it’s fierce. This production from Melbourne’s Vass Theatre Group, directed by Gary Abrahams, is appropriately vigorous and dynamic. Harmon’s don’t-go-there moments (in which Daphna does indeed go there) elicit the kind of vocalised responses in an audience more usually associated with boxing matches.