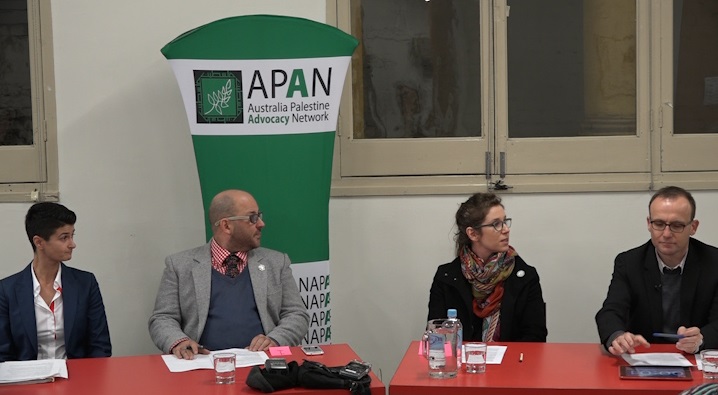 The candidates who attended were Labor candidate Sophie Ismail and the Greens candidate Adam Bandt MP. The Liberal candidate Philip Liu had also been invited to participate but declined.

A few brave Jews including Henry Greener (The Shtick) and myself attended the event last night at Ross House, Flinders Lane, Melbourne that was organised by the Australian Palestinian Advocacy Network (APAN).

There is some interesting commentary there, in particular the clear evidence that the Greens policy on Israel-Palestine is beyond a joke.

Listen to the short segment that commences at the 50:47 mark (full audio below) where you can hear my question to Adam Bandt on the volte-face of Stephanie Hodgins-May, the Greens candidate for Melbourne Ports or watch the video clip of it below. After the meeting I spoke further with Adam Bandt and pointed out that the UN, the organisation that he suggests is being demeaned by ZCV is the one responsible for perpetuating the Palestinian refugee problem.

I told him that the  Palestinians are the only group in the world whose descendants are counted as refugees, and have a specific UN agency, UNRWA which receive over 4 times as much funding and employs 5 times more staff than UNHCR the agency which takes care of all other world refugees combined.

Furthermore I told him that his admission that he does not fathom the complexities of the Israel-Palestine conflict and that his only comeback is the vacuous policy of The Greens means that the Greens have no credibility whatsoever in this space. It was very apparent on the night that the Labor candidate in Melbourne is a much more sensible choice for the electorate. Maybe because Sophie Ismail is a Muslim and a staunch advocate for LGBTI she will give Bandt a serious run for his money.

Here is the full audio of the proceedings:

Readers may also be interested in this overview of electoral candidate responses to APAN’s ‘I Vote Palestine’ campaign.

[This article has been compiled by David Schulberg]