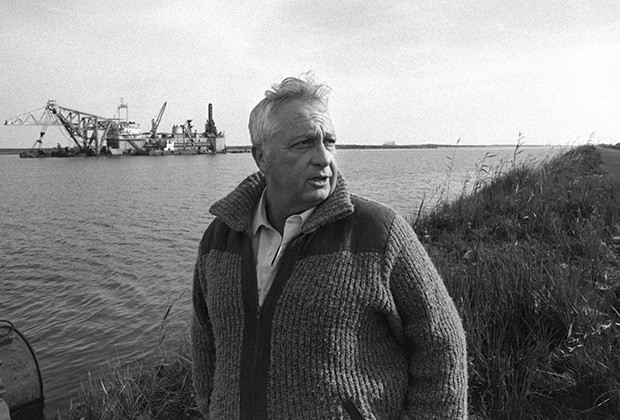 - PHOTO TAKEN 21JAN82 - Israeli Defence Minister Ariel Sharon stands on the banks of the Suez Canal following an official visit to Egypt January 21, 1982 in this handout photo by the Government Press Office. [Surgeons battled to keep Sharon alive on January 5, 2006 after a massive brain haemorrhage felled the Israeli prime minister in the midst of his fight for re-election on a promise to end conflict with the Palestinians.] ?? OUT &W ONLY ??? USE ONLY (CREDITS: Moshe Milner/Government Press Office) - RTXO4KB

This year will mark the 35th anniversary of the massacre of Palestinian refugees in the Sabra and Shatila camps in Beirut. In July 1982 Israel invaded Lebanon under the direction of the then Israeli Defence Minister, Ariel Sharon. After entering Beirut the Israeli forces encircled Sabra and Shatila on September 18, allowing the Israeli-backed Phalange militia, a fascist Lebanese group, into the camps where they slaughtered almost 3,000 people, mainly women, children and the elderly.

Around 20,000 Palestinian and Lebanese civilians were killed by the invading forces.

Ariel Sharon, as the Prime Minister of Israel, unleashed a murderous campaign of terror against the Palestinian people, at the same time labelling Palestinians “terrorists”. This is not a new tactic.

Israel has long used the term “terrorism” to describe pretty much every act of Arab resistance to Israeli occupation and aggression. So, Palestinians who refuse to accept the usurpation of their land and choose to defend their national existence are labelled “terrorists”. Lebanese patriots who resist Israeli occupation of their country are also labelled “terrorists”. (In 1986 a compilations of essays appeared in a book called “Terrorism: How the West can win”. The essays were written by a long list of noted warmongers, including former members of US Republican administrations, George Shultz and Jeane Kikpatrick. It was edited by the current Israeli Prime Minister Benjamin Netanyahu, at the time the Israeli ambassador to the UN.)

Read the full editorial at The Guardian – The Worker’s Weekly.