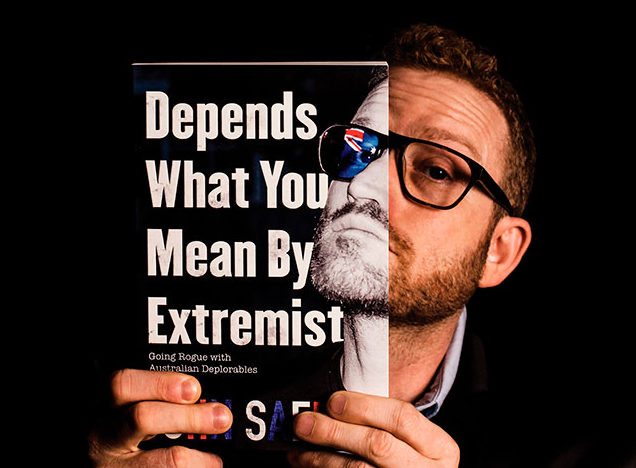 Let me tell you something about interviewing people. It’s very often disappointing. Especially when it’s someone you’ve been in awe of. Very often the person you have built up such an interest in can disappoint in an interview, because they’re guarded, or nervous, or shy, or not as interesting as you thought. Or you stuff the interview and ask really lame questions.

He’s unguarded, unpretentious and totally engaging. He’s also intensely passionate about his subject matter and in every turn in the conversation he seems to be discovering something new. His passions are race, religion and ethnicity. And in a media environment of 2-minute bites, where the subject is so poorly explored, Safran’s latest book Depends What You Mean By Extremist (Going Rogue with Australian Deplorables) takes us to the streets and behind closed doors for a more detailed examination of extremist views, delivered with humour, intrigue, confusion, and surprising compassion and kindness. Nothing is really as it seems and Safran has this uncanny ability of getting right up close.

He’s interested in what his subjects have to say. He wants to drill down to why someone would think something so preposterous or illogical.