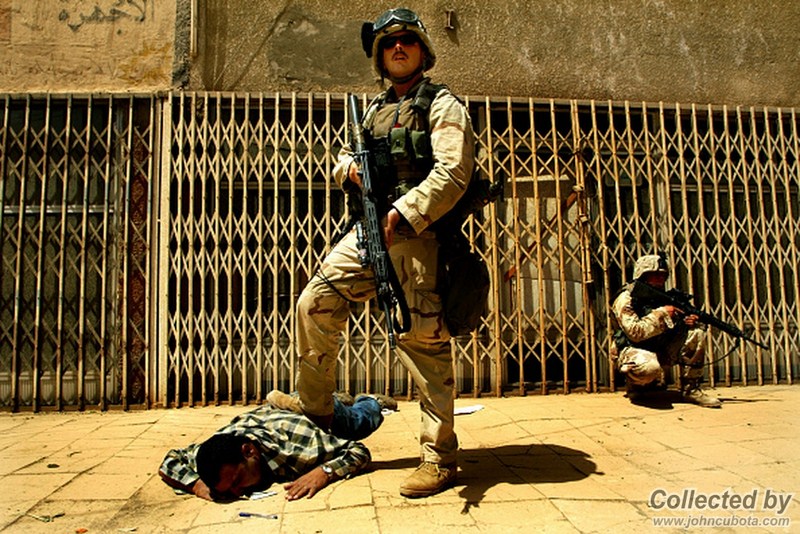 Carolyn Cole –– – FG.0410.baghdad14.CMC...04/10/2003––Two U.S. Marines detain an Iraqi man who was carrying a weapon in the downtown streets of Baghdad, on the same day that a man was shot for the same offense in a nearby neighborhood. Many men were looting the police station and may have been carrying the weapons home with them. LOS ANGELES TIMES PHOTO BY CAROLYN COLE

How the War on Terror is failing, as told by one of its operatives

David Kilcullen operates in the post-structural, morally grey nether world that neoliberalism has created. Not quite a mercenary — but not much better — he slides between being an Australian soldier, a top-level civilian strategic thinking adviser to the US military, a “security consultant” and an academic.

Kilcullen drops hints of his world by mentioning in passing that when ISIS captured Mosul in 2014, he was out of mobile telephone coverage. He happened to be at a mountainous Colombian military forward base in operations against the leftist FARC guerillas.

In short: he is a player in a dimension that you and I get to read about, but never enter. It is a labyrinth in which highly-trained tough guys analyse reams of “intelligence” in order to organise “ops” in obscure places where “Western” forces commit ruthless slaughter.

You get the unmistakable impression that Kilcullen and his buddies relax after their “ops” by getting their guns out and comparing bores.

His overall assessment of the War on Terror is that “we’re worse off than before 9/11”. Because of his background, he is worth reading — but not relying on. The fact that he is demoralised about anti-terrorist strategy is more significant than his proposals, even though they are awful.