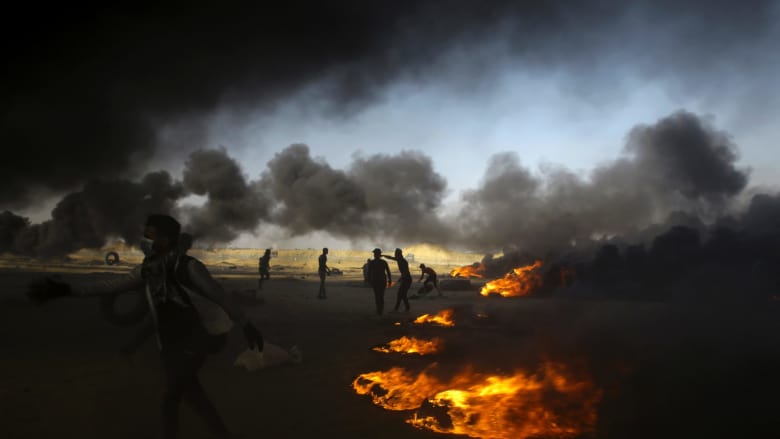 The loss of 60 Palestinian lives along the Israel-Gaza border on Monday was indeed tragic and heartbreaking.

Yet these deaths were not the result of anything resembling a peaceful protest, despite claims to the contrary; nor were they the result of either the difficult and worsening humanitarian situation in Gaza, or the opening of the new US embassy in Jerusalem.

Instead, they were yet another product of the often divided Palestinian leadership, which has cost the Palestinian people so much.

Hamas, which has ruled Gaza with an iron fist for 11 years has become increasingly isolated. It has also been locked in a very bitter political struggle with the Palestinian Authority, which rules the West Bank and has far more international recognition.

Furthermore, Hamas’ traditional methods of gaining attention both internationally and on the Palestinian streets – launching suicide bombings and rocket attacks, or creating terror tunnels targeting Israel – have been closed off by Israeli counter-measures.

So to regain international influence, and to score points against the Palestinian Authority in Palestinian opinion, Hamas has been sponsoring mass demonstrations along the border called the “Great March of Return” since late March.

Given all these circumstances, Israeli forces were always going to have to use significant force to prevent breaches of the border fence and protect nearby communities. There were reportedly at least 12 major breakthrough attempts on Monday.

These breakthrough efforts were an attempted invasion. Hamas leaders repeatedly said the goal of the “march” was to eliminate the Gaza border with Israel, allow Palestinians to return to homes inside Israel their ancestors had lost when Israel was created in 1948, and eliminate Israel.

Those who say Israel should have found non-lethal means to counter the invasion attempts – and Israeli forces extensively employed tear gas, rubber bullets, warning shots and other riot-control measures before resorting to live fire – frankly cannot offer any plausible way this could have worked, given that large unarmed masses were interspersed with the armed, and many of the armed were concealing their weapons.

Moreover, it now seems likely most of those killed were Hamas activists or militants. Hamas official Salah Bardawil, in an interview with the Palestinian Baladna news outlet, said: “In the last rounds of confrontations, if 62 people were martyred, 50 of the martyrs were Hamas and 12 from the people.”

Yet some, like Brendan Ciaran Browne in his article in The Age, “World must call out Israel over law breaches”, think we should reward Hamas for its cynical tactics.

Read the full article written by Tzvi Fleischer at the Sydney Morning Herald.