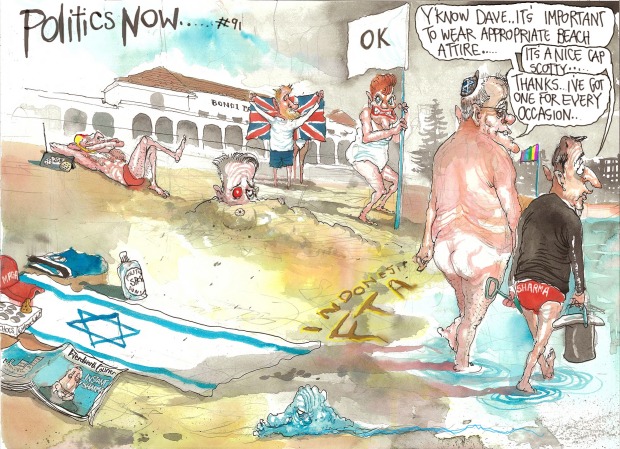 The prospect of moving Australia’s embassy in Israel was met with surprise and cynicism in the battleground of Wentworth on Tuesday, as voters questioned motives behind the Coalition plan.

Labor decried the injection of sensitive foreign policy into the final days of the local campaign, accusing Prime Minister Scott Morrison of trying to influence the significant Jewish vote and reset the agenda on the Coalition’s terms.

At Bondi’s Umu health food store, in the heart of Malcolm Turnbull’s former electorate, Jonathan Cohen said he opposed any move of the embassy away from Tel Aviv, but believed the plan would win votes for Liberal candidate and former ambassador Dave Sharma this Saturday.

“It is going to inflame the region and make Australia a target,” he told The Australian Financial Review.

“It will reflect tensions within Israel and the Arab areas and, from a humanitarian point of view, it will exacerbate existing problems and stir the pot.”

Catching sun at Bronte Beach, Les O’Keefe said he was supporting Mr Sharma over independent Kerryn Phelps, but not because of the embassy announcement or a review of Australia’s support for the Iran nuclear deal.

“The politicians are all talk. Are they actually going to do it?

Read the story in The Australian Financial Review.