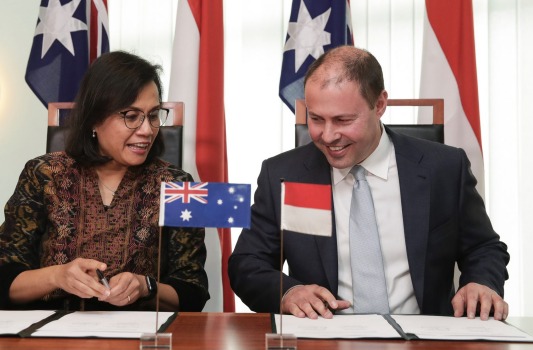 The Morrison government’s consideration of moving its embassy to Jerusalem won’t derail the bilateral relationship with Jakarta, Indonesia’s Finance Minister suggested during a meeting with Treasurer Josh Frydenberg in Canberra.

Sri Mulyani Indrawati, one of Indonesia’s most senior politicians in the world’s most-populous Muslim-majority country, declined to answer media questions directly about Prime Minister Scott Morrison’s surprise announcement last month that Australia may follow the US President Donald Trump in relocating the embassy to Jerusalem.

Speaking more broadly, she said the Australia-Indonesia relationship was “robust” and would always have “ups and downs”.

“I’m sure the Indonesia-Australia relationship will continue to be positive and strong,” she said at Parliament House.

Former prime minister Malcolm Turnbull warned on a visit to Bali last week that if the proposal was implemented “it would be met with a very negative reaction in Indonesia”, after meetings with Indonesian President Joko “Jokowi” Widodo and Foreign Minister Retno Marsudi.

Mr Frydenberg, who is Jewish and personally supports relocating the embassy in Israel from Tel Aviv to Jerusalem, said alongside Ms Mulyani that Australia had a close and important relationship with the world’s fourth most populated country.

Read the article by John Kehoe in the Australian Financial Review.