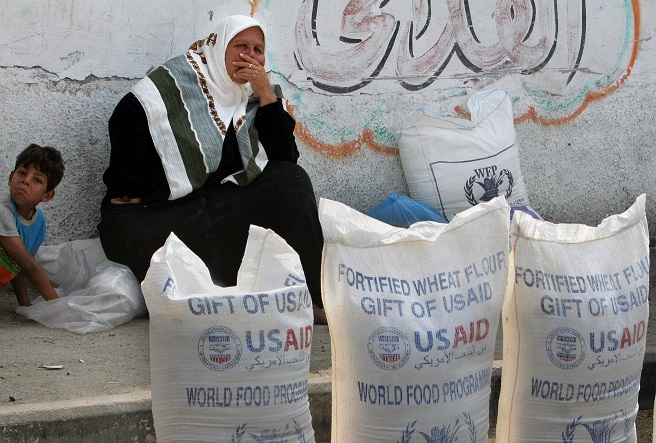 A Palestinian woman sits next to sacks of flour outside the UN Relief and Works Agency, (UNRWA) aid distribution station in Gaza City, Wednesday, June 20, 2007. The U.N. World Food Program, meanwhile, began bringing in 225 metric tons of food into Gaza through Israel, in addition to 200 metric tons of food and medical supplies it sent in on Tuesday. "There is a serious humanitarian crisis developing in Gaza as a result of the recent turmoil and closure of the border crossings," said Arnold Vercken, WFP director in the Palestinian territories. (AP Photo/Khalil Hamra)

The World Food Program has announced cuts in food aid affecting some 190,000 impoverished Palestinians in Gaza and the West Bank – or half of all its recipients there – citing a severe funding shortfall.

The UN agency said it would, as of January 1, suspend food assistance to 27,000 people in the West Bank. In addition, food aid to 165,000 people in the territory and in the Gaza Strip would be reduced by 20 per cent.

This article appeared in The Mercury.