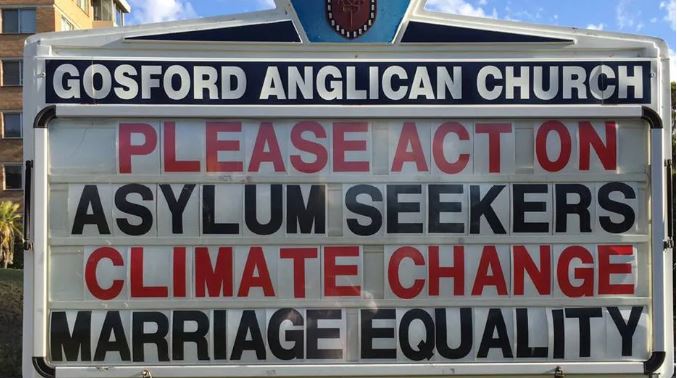 It certainly helps, when aiming to become Australia’s prime virtue signaller, if you have at your disposal an actual virtue signal.

That’s what Father Rod Bower has established outside his little Anglican Church in Gosford, north of Sydney. The left’s favourite God-botherer uses the building’s standard church noticeboard as a broadcasting beacon for every dopey leftist piety you can imagine.

You name the issue and Godly Rod has thrown up something reflexively smug and superior about it on his personal signal of virtue.

“Bless the burqa”, “Jesus had 2 dads and he turned out OK”, “We seem to have forgotten all about climate change”, “Supporting Safe Schools program”, and so on.

It’s basically a drive-by guide to predictable social justice commentary for people without enough time to read the Guardian.

Naturally, Bower’s short-form sanctimony has won him a considerable measure of fame. He frequently turns up on television and in print, and presently is pushing an autobiography titled Outspoken.

The cover displays Bower’s celebrated sign (“All justice is social”) and Bower himself.

In 2017 he chained himself to the gates of Kirribilli House as part of a “Love Makes A Way” protest against the treatment of asylum seekers in Nauru and on Manus Island.

“We chain ourselves not only to the gate, but to the Manus men,” Bower announced on Facebook. “All humanity is connected, and when one suffers, we all suffer.”