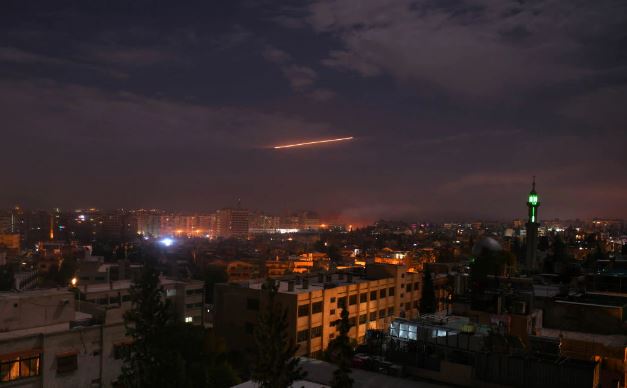 Israel struck what it said were Iranian targets in Syria on Monday in response to missile fire it blamed on Iran, sparking concerns of an escalation after a monitor reported 11 fighters killed.

Israel announced the strikes against facilities it said belonged to the Iranian Revolutionary Guards’ Quds Force as they were occurring, continuing its recent practice of speaking more openly about such raids.

It said the strikes were in response to a medium-range, surface-to-surface missile the Quds Force fired from Syria at the Israeli-occupied Golan Heights on Sunday, which Israeli air defences intercepted.

“We saw that as an unacceptable attack by the Iranian troops – not proxies, not Shiite militias, not Syrian forces – Iranian troops firing an Iranian-made missile from the vicinity of Damascus towards sovereign Israel,” Israeli military spokesman Jonathan Conricus said.

It said it also hit Syrian air defence batteries in response to dozens of missiles fired from them.

Russia, which like Iran is a key backer of Syrian President Bashar al-Assad in the country’s war, said the Israeli strikes killed four Syrian soldiers and wounded six, while damaging Damascus airport infrastructure.

Read the report and watch the item on SBS TV News (AFP).