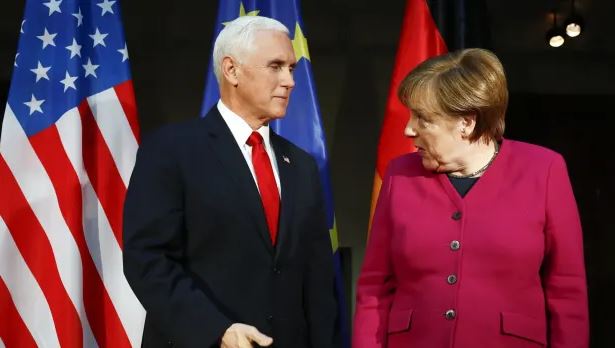 Munich | German Chancellor Angela Merkel drew lengthy applause at the weekend for her spirited defence of a multilateral approach to global affairs and support for Europe’s decision to stand by a nuclear deal with Iran.

US Vice-President Mike Pence was not among the impressed, however, and he doubled down on American criticism of Europe.

Merkel’s comments at the Munich Security Conference, an annual gathering of world leaders and top global defence and foreign policy officials, followed days of acrimony between the US and Europe over Iran.

Merkel told the group – which included the largest US delegation ever with dozens of members of Congress, Ivanka Trump, Pence and others – that she shared American concerns about many Iranian efforts to increase its power in the region.

But while she said the split with the US over Iran’s nuclear agreement “depresses me very much,” she defended it as an important channel to Tehran, stressing the need for international diplomacy.

“I see the ballistic missile program, I see Iran in Yemen and above all I see Iran in Syria,” she said. “The only question that stands between us on this issue is, do we help our common cause, our common aim of containing the damaging or difficult development of Iran, by withdrawing from the one remaining agreement? Or do we help it more by keeping the small anchor we have in order maybe to exert pressure in other areas?”

Read the article by David Rising and Geir Moulson in the Australian Financial Review.