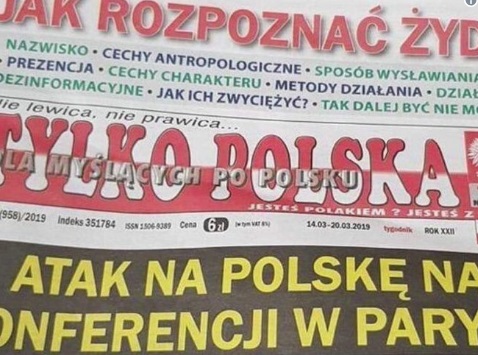 A right-wing newspaper in Poland has sparked fury over an anti-Semitic article that appeared on its front page that showed readers ‘how to spot a Jew’.

The headline of the weekly national paper, Tylko Poska (translated to Only Poland) read: “Attack on Poland at conference in Paris”, voicing anger at alleged anti-Polish guest speakers at a conference covering Holocaust studies in Paris last month.

The front page also read: “How to defeat them? This cannot go on!”

The article listed different stereotypes, such as names, features, expressions, appearances, character traits, methods of operation and disinformation activities, which state could be used to identify Jewish people.

Soon after the paper was distributed in the Sejm, the lower house of the Polish parliament, politicians expressed their outrage.

Michal Kaminski, for the centre-right Poland Comes First party, said it was “an…absolute scandal such filthy texts as if taken from Nazi newspapers, were sold in the Polish parliament”.

And, it wasn’t just politicians who were upset over the article.

Social media users took to Twitter to express their anger and compared the article to Nazi propaganda in the 1930s.

Read the article on B&T Magazine.