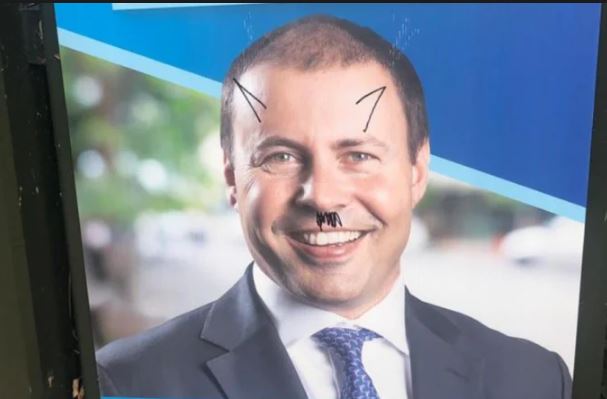 The damage was discovered on posters in Hawthorn, in the Treasurer’s inner-east Melbourne electorate of Kooyong overnight.

Textas had been used to draw the distinctive toothbrush shape of notorious Nazi dictator Adolf Hitler’s moustache on the election posters along with the words “right wing fascist” as well as devil horns.

“It’s one thing for these cowards to graffiti a sign, but it’s another thing altogether to invoke the horrors of the Holocaust and the evils of Hitler and the Nazis. These people should be ashamed of themselves.”

Mr Frydenberg, 47, was sworn in as treasurer in August last year wearing a black kippah and used a Hebrew Bible for the oath.

His mother was a Hungarian Jew born in 1943 who arrived in Australia in 1950 as a stateless child from a refugee camp after escaping from the Holocaust.

His father is also Jewish, and emigrated to Australia from Poland.

Chairman of the Anti-Defamation Commission Dr Dvir Abramovich said he decried in the “strongest possible terms” the “cowardly and hateful attack”.

“It is sicking and chilling that seven decades after the Holocaust Jewish members of our community continue to be targeted by vilification and Nazi imagery,” Dr Abramovich said.

Read the article by Rob Harris (national politics reporter) in the Herald Sun.