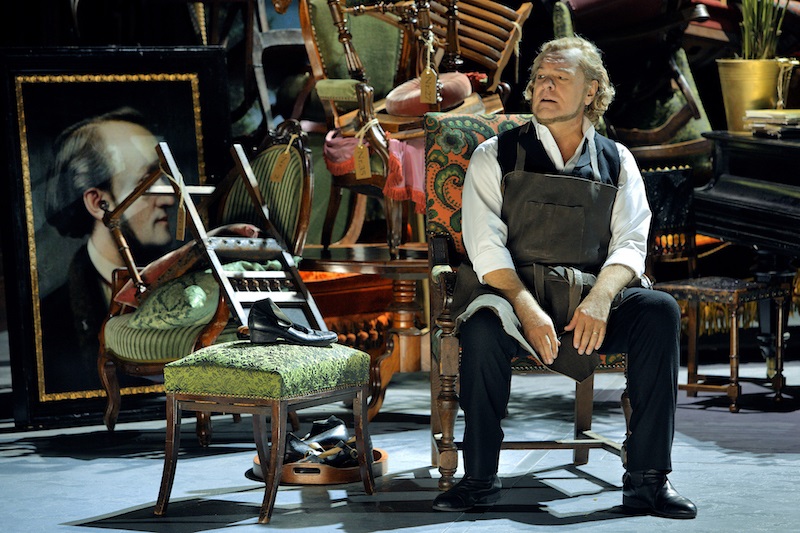 Barrie Kosky’s daring, dazzling production is controversial yet poignant, with the music having the final say.

In Richard Wagner’s glorious celebration of being German in Die Meistersinger von Nürnberg, Jewishness gets a beating and, in Barrie Kosky’s daring and inescapably controversial production at the Bayreuth Festival, Wagner is put on trial. It’s a juxtaposition and interpretation that zooms in on Wagner’s ideology on love, art and politics – which his work so completely embodied – to such an extent it makes Kosky’s 21st-century perspective not simply instructive, but shockingly poignant.

Kosky, who is Australian and of Jewish ancestry, never ignores the work’s mid-16th century setting of a song competition in which the prize is the hand in marriage to the young woman Eva, arranged by her father Veit Pogner. Kosky brings it to colourful and bucolic life in the hundreds of characters costumed in stunning Renaissance dress by Klaus Bruns. But he tells another story through Rebecca Ringst’s intelligently conceived set designs, beginning with the warm, wooden salon in Wagner’s Bayreuth oasis, Wahnfried. Then, there is Wagner on stage as the protagonist of the story, cobbler and mastersinger Hans Sachs. We also see Cosima Wagner as Eva and Franz Liszt (Cosima’s father) as Eva’s father Veit Pogner. More Wagner lookalikes appear. The young knight Walther, who is in love with Eva and she with him, is a younger Wagner.

Wagner-Sachs is the centre of prankish attention, both entertaining and annoying, in a room squeezed with the characters of a play-within-a-play, including the comic mastersingers who enter from under the piano lid. It’s when the Jewish conductor Hermann Levi enters – the man who conducted the premiere of Parsifal and was accused of having an affair with Cosima –that Wagner-Sachs’ tune changes. As he sets about humiliating him, you’re in no doubt this is the town clerk Beckmesser, the story’s derided character who can’t sing and has no hope in hell of snagging the beautiful Eva.

Read the review by Paul Selar in Limelight.