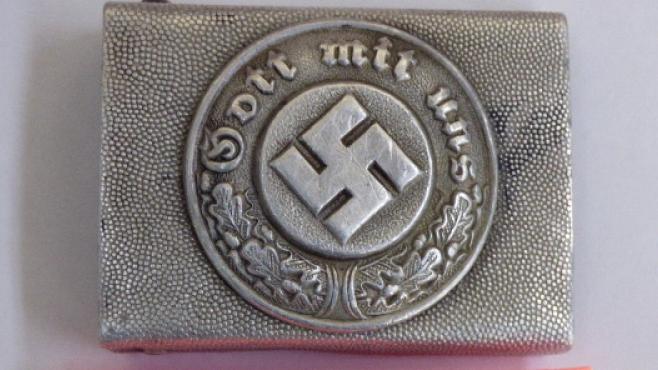 Outrage over Launceston auction of Nazi memorabilia including SS ring

A Launceston auction house will go ahead with the sale of Nazi memorabilia despite outrage from a prominent Jewish group.

Among the items being offered by Launceston’s Armitage Auctions on Wednesday is an SS officer’s ring.

The SS was the most extreme military unit of Hitler’s Third Reich and were responsible for the genocidal murder of six million Jews during the Holocaust.

Also on offer in the auction are a police officer’s badge and a Hitler youth belt buckle adorned with swastikas — the most potent symbol of the Nazi regimen.

The Chairman of the Anti-Defamation Commission Dvir Abramovich called on the auction house to remove the items from the sale.

“This is cruel and sickening. Peddling the tools of the devil and trafficking in death and blood must never become normal in Tasmania,” he said.

“Everything about this repulsive trade is indecent, and if you want to see first-hand the face of pure evil, responsible for the barbaric extermination of millions, look no further than the perverse objects showcased in Armitage Auctions.

“I’m sure that Hitler would be delighted to know that the ghastly instruments of his regime’s monstrous crimes, are proudly offered for sale in an Australian store in 2019 and are available for neo-Nazis and Third Reich worshippers who are nourished and revel in this stuff.

Read the article by David Killick in the Mercury.