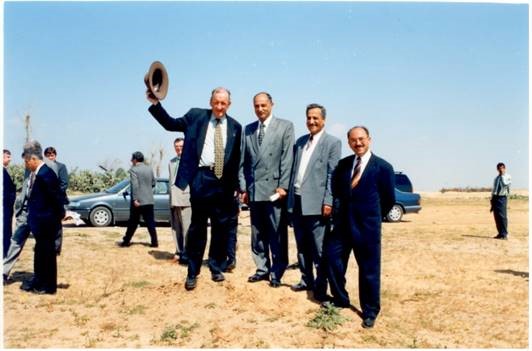 Tim Fischer belongs to a unique generation of Australian political leaders we are farewelling fast, including Gough Whitlam, Malcolm Fraser and Bob Hawke. Whether you agreed with their ideology or not, you could not but respect them.

I was in regular contact with Tim in my role as the representative of Palestine and the Palestine Liberation Organization in Australia. One day in February 1997, I was sitting in my office when Tim rang me and asked me to come over to see him. My office was within walking distance of the federal parliament. He told me he was going to Israel and Palestine and asked if I could arrange for him to meet President Yasser Arafat. At the time Tim was leader of the National Party and deputy prime minister.

I welcomed his visit and reminded him of the fact that, although Arafat had been invited and visited all corners of the world—including the United States, Sweden, England, France, Germany, the Soviet Union, China and Japan—Australia was one of the few countries that had not yet invited him, and it would be timely and nice for him to carry such an invitation. He said, ‘Leave it with me.’

During the meeting, Tim whispered in my ear that he would like to visit the Church of the Nativity. It was night-time and the church doors had already been closed. I informed Arafat of Tim’s wish, so he asked his protocol official to contact the church and ask them to do him a favour by allowing his visitor to see the church. Arafat had excellent relations with the church leaders in Palestine and they held him in high regard also.

Read the tribute by Ali Kazak on The Strategist.