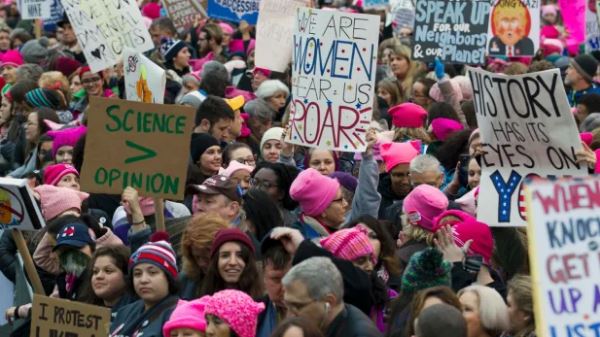 The Women’s March was was once the heart of anti-Trump activism. Three years later, it is a lesson in how dramatic protest movements can fade as quickly at they appeared, writes Marissa J. Lang.

One day after President Donald Trump’s inaugural parade wound its way through the District of Columbia, hundreds of thousands of women poured into the city from across the country, carrying signs, pink knitted hats and an overwhelming sense of rage and grief.

The first Women’s March – an alliance of hundreds of nationwide marches widely considered the largest single-day protest in American history –funnelled feelings into action. Women who had never carried a sign became seasoned protesters. Strangers formed letter-writing campaigns and action networks. It was, experts said, the moment the “resistance” was born.

Three years later, as Trump commences the final year of his first term, the Women’s March is planning to take to the streets once more. But many of the demonstrators who descended on Washington that first year, catapulting the new organisation from obscurity to a household name, will not be there to see it.

After overhauling its mission, structure and leadership, the organisation once considered the beating heart of the anti-Trump movement seems to be on life support.

Experts who follow protest movements said the group’s own successes – putting more women on the front line of American politics, inspiring a new wave of progressive groups, encouraging an unprecedented number of women to run for office – have rendered the Women’s March increasingly irrelevant. Others blame the failures on an organisation that has struggled to find its purpose amid national controversies, financial mismanagement, accusations of anti-Semitism and a reputation for being unwilling to play nicely with others.

Read the article by Marissa J.Lang in the Australian Financial Review.