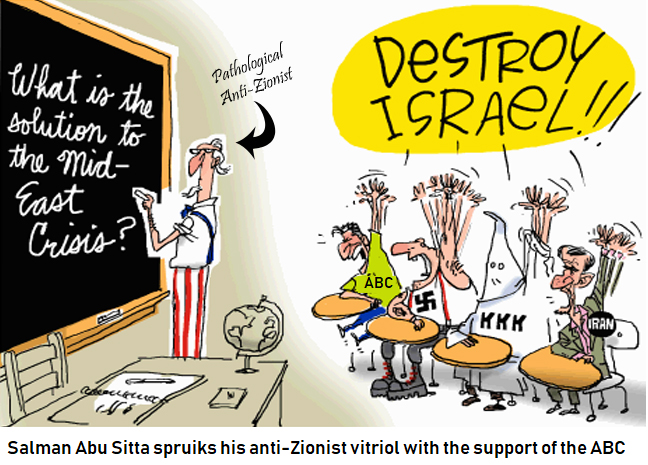 The ABC promotes a rank anti-semite

The ABC has a track record of publishing material that is anti-Israel. The principal Jewish community organisations, AIJAC,  ECAJ and AJA have repeatedly have repeatedly taken the ABC to task for promoting articles and programs that demean and demonise Israel1. Nevertheless, the ABC continues in this same vein, rarely apologising for its rank anti-Israel media bias. A leopard cannot change its spots and sadly this expression seems to apply to the behaviour of the ABC.

I wish to draw attention to the latest contribution by the ABC to the huge accumulation of misinformation that it has disseminated about the Israeli-Palestinian conflict over the years. The article titled ‘The moral case against Zionism’ by Salman Abu Sitta is pure pro-Palestinian propaganda dressed up in a cloak of respectability appearing as an opinion piece on the ABC Religion and Ethics website. Furthermore, broadcaster Phillip Adams also gave Abu Sitta the opportunity to spruik his vicious brand of anti-Zionist vitriol via his own ABC radio program last October.

There is nothing moral about the argument presented; rather the title based on the content of Abu Sitta’s opinion piece should be amended to ‘The Immoral Case against Zionism’. The false claim that Zionism is a colonialist enterprise is immediately stated by the author without any basis.

My refutation below of this false premise of the article that ‘Zionism = Colonialism’ leads to the complete collapse of the author’s credibility.

If I were to speak of ‘Palestinianism’ in the same way that Abu Sitta decries Zionism (many do consider Palestinianism to be just a fabrication designed for the purpose of countering the Zionist narrative) I would be accused of denying the rights of his ‘people’ to express their own political identity. Abu Sitta has no right or authority to vilify a political movement that sits at the very core of Judaism.

Abu Sitta’s article would be considered today as being antisemitic according to the International Holocaust Remembrance Alliance’s (IHRA) working definition of antisemitism.  Above all, this is why the ABC needs to be condemned, because it has allowed the doctrinaire, polemic rant of, in our view, a vicious antisemite to be given validity.

Abu Sitta delivered last year’s Edward Said lecture. Addressing a 2017 conference in Ireland on “Israel’s right to exist”, Abu Sitta described Israeli policies as “apartheid” and “the most comprehensive ethnic cleansing operation in history”. Of course, he does not want to mention the real ethnic-cleansing of Jews from Arab lands that took place at the time the State of Israel was created when around 800,000 Jews were forcibly expelled, most emigrating to Israel where they were immediately absorbed. He added, “There is no moral, legal, demographic, geographic, or historic reason why [Palestinians] cannot return [to Israel proper].”

At the time of the Edward Said lecture it was asked “Why is the University of South Australia offering the bully pulpit to a speaker who has cast Israel as a Nazi state, and who charges that the Palestinians are modern-day Auschwitz inmates enduring a Holocaust at the hands of the Israelis?”

Recently Abu Sitta compared US plans to boost the Palestinian economy as akin to Auschwitz guards promising to give inmates two meals a day instead of one.

He has referred to the “original sin” as being the Balfour Declaration and constantly compares the Israelis to the Nazis. He outrageously alleged that during the 1948 War of Independence, which incidentally was instigated by the armies of five neighbouring Arab states that invaded the new State of Israel, Palestinians were made to dig their own graves before being shot dead and were shoved into concentration camps, which were referred to as “POW camps”.

He has absurdly referred to Israel’s  kibbutzim as “semi-military structures” and claimed that the reason for Israel’s existence was not to accommodate people but to create “the largest military base in the world” and if only these bases were removed then the Palestinians could return to their old homes.

He has said that the people of Gaza are just “throwing projectiles” into southern Israel as a message to the people there to get out of their old homes.

How can the ABC justify publishing such tendentious misinformation that only obfuscates an honest discussion about the Israel-Palestine conflict? The thoughts and ideas of Abu Sitta do nothing but misconstrue history and deny the entitlement of Jews to their national homeland.

He needs to stop weaponising Palestinian victimhood and the ABC needs to recognise that it has once again been complicit in publishing lies and misinformation that obscure the truth.

1  Please note that I have not included the Anti-Defamation Commission here as its CEO Dvir Abramovitch mistakenly believes that his approach of kowtowing to the ABC is superior to challenging it.
2  From ‘Zionism is Not Colonialism’, COHAV (International Umbrella for Volunteer Israel Advocacy Groups) at http://www.cohav.org/zionism-is-not-colonialism.html

[A copy of this article with some minor amendments has been published in the 20 January 2020 edition of NEWS & VIEWS: AJA Bulletin.]

Herewith is the response to my complaint about the publication of Abu Sitta’s article by the ABC:

Thank you for your email about the Opinion piece The moral case against Zionism published by ABC Religion & Ethics on 15 January.

Your complaint has been referred to Audience and Consumer Affairs, a unit which is separate to and independent of content making areas within the ABC. Our role is to review and, where appropriate, investigate complaints alleging that ABC content has breached the ABC’s editorial standards. These standards are explained in our Editorial Policies: https://edpols.abc.net.au/policies/. We have carefully considered your complaint, sought information from ABC Religion & Ethics, and assessed the article against the relevant editorial standard, in this case:

7.7 Avoid the unjustified use of stereotypes or discriminatory content that could reasonably be interpreted as condoning or encouraging prejudice.

The moral case against Zionism is labelled opinion content and author Salman Abu Sitta is described as the founder and president of the Palestine Land Society. The ABC does not endorse the views of its opinion contributors.

Audience & Consumer Affairs accepts that some audience members may find Sitta’s views inflammatory. To the extent that the views he puts forward in this article could be considered anti-Semitic, we are satisfied they are sufficiently justified within the context of an opinion piece that seeks to represent the views of a prominent Palestinian and more broadly the Palestinian community. In recognition of the fact that the history of the state of Israel is highly contentious and emotive, ABC Religion & Ethics published a direct reply on 21 January titled, What Salman Abu Sitta misrepresents about Zionism (https://www.abc.net.au/religion/what-salman-abu-sitta-misrepresents-about-zionism/11885420). The author of this reply is Bren Carlill, director of public affairs at the Zionist Federation of Australia.

Although we are satisfied that no breach of standard 7.7 has occurred, we would nonetheless like to assure you that your feedback has been carefully noted by our unit.

Thank you once again for taking the time to write.