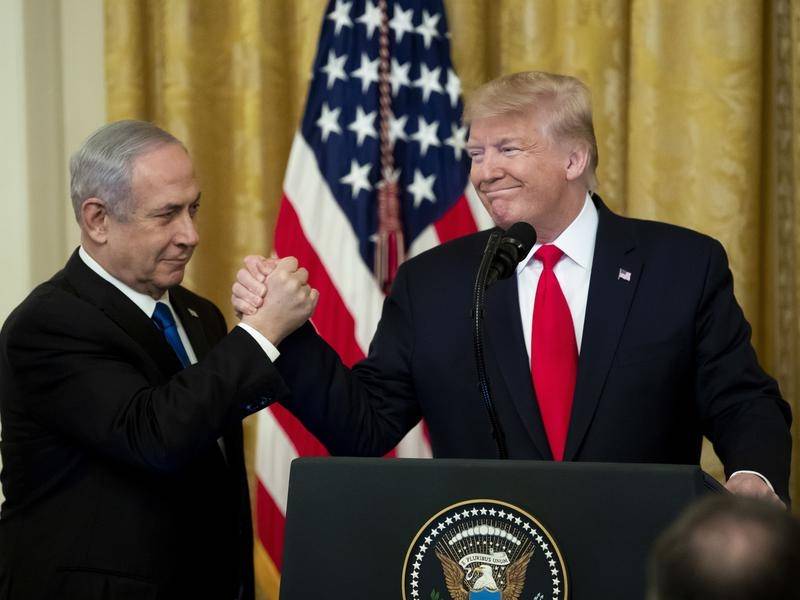 Donald Trump has unveiled details of an ambitious and long-awaited peace plan that aims to resolve the ongoing struggle between Israel and Palestine.

In what he called a realistic “win-win”, the US president proposed creating two states by doubling the amount of Palestinian land while ensuring Jerusalem “will remain Israel’s undivided capital”.

Israeli PM Benjamin Netanyahu stood beside him, lauding his US counterpart and calling the deal a chance to charter a “brilliant future” for all sides.

It came just hours after Mr Netanyahu was indicted on charges of fraud and bribery for allegedly offering political favours in return for positive press coverage and helping wealthy business contacts in return for gifts.

Critics have pointed out the announcement of the plan, the details of which were sorted months ago, is a convenient distraction for the embattled Israeli PM – and for Mr Trump, who this week would otherwise be more likely the focus of impeachment trial headlines.

Palestinian leaders did not join the unveiling and have called for a day of “rage”.

As protesters burnt photographs of the US and Israeli leaders, Palestinian president Mahmoud Abbas said from the West Bank: “After the nonsense that we heard today, we say a thousand no’s to the deal of the century”.

He said the Palestinians remain committed to ending the Israeli occupation and establishing a state with its capital in east Jerusalem.

“We will not kneel and we will not surrender,” Mr Abbas said, adding that the Palestinians would resist the plan through “peaceful, popular means”.

Read the article by Samantha Dick and Andrea Hamblin in The New Daily.