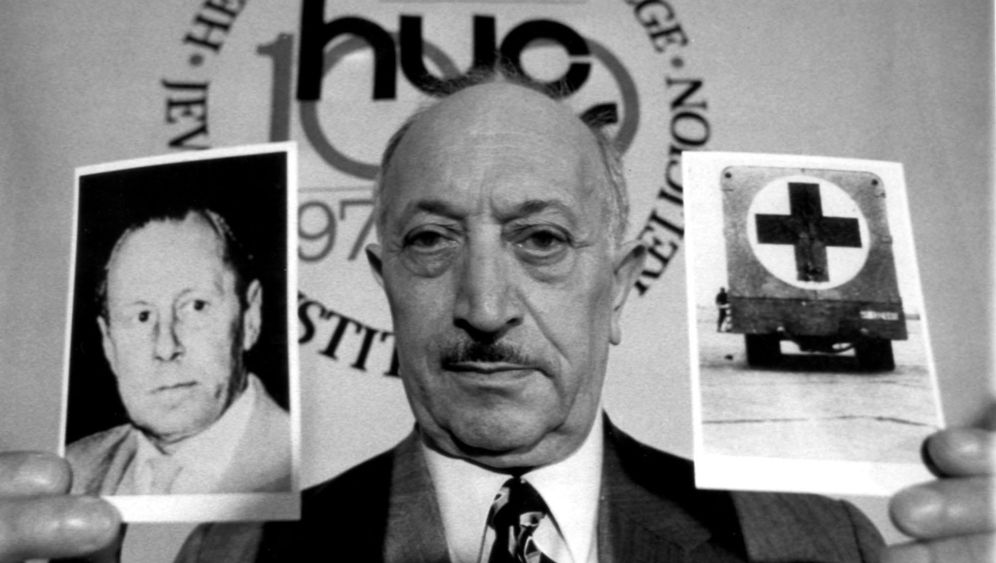 ** FILE ** Simon Wiesenthal displays two pictures, May 31, 1973, which he says refer to Nazi criminal Walter Rauff, during a news conference at the Hebrew Union College in New York City. Simon Wiesenthal, the Holocaust survivor who helped track down numerous Nazi war criminals following World War II then spent the later decades of his life fighting anti-Semitism and prejudice against all people, died Tuesday. He was 96. Wiesenthal died in his sleep at his home in Vienna, Austria, according to Rabbi Marvin Hier, the dean and founder of the Simon Wiesenthal Center in Los Angeles. (AP-PHOTO)

From the mafia to Nazi hunter. Dannielle Maguire, ABC, February 27:

Al Pacino’s new TV series Hunters … has already got a lot of people talking. The show is about a squad of Nazi hunters searching for escaped members of the Third Reich hiding out in the US in the 1970s … It’s also about the Holocaust. Auschwitz-Birkenau State Museum has condemned the series, which has received mixed responses from critics.

A series about in-hiding Nazis being hunted and killed is going to ruffle some feathers, to say the least. As such, no one’s jaws should be hitting the floor when discovering that Amazon’s new hyper-violent and darkly comedic drama Hunters is already one of the most polarising TV shows of 2020 and beyond.

Every time I was just starting to warm to this high-profile thriller over its 10 episodes, it would do something incredibly dumb to make me dislike it all over again. Its cause is most definitely not helped by an opening 90-minute episode that is far and away the worst … The tone is set with an opening scene that is horribly hackneyed … and more over the top than an Al Pacino accent. Throw in so much ultra violence that even Anthony Burgess might consider it a tad excessive and the show’s style is firmly established: “Tarantino-trite”.

It’s about an eclectic team of badass people hunting ageing Nazi war criminals who are living incognito in 1970s America, and “whacking” them. Hooray! This cold-blooded A-team is headed by elderly Jewish Holocaust survivor Meyer Offerman, played by Al Pacino. Wait a minute. In this day and age, when we are forbidden to “culturally appropriate”, a Jew is portrayed by a famously Italian-American actor? Yes indeed, but as you will eventually discover, if you stick with the blockbuster to the bitter end, there is a reason for this.

Read this cut-and-paste article in The Australian.