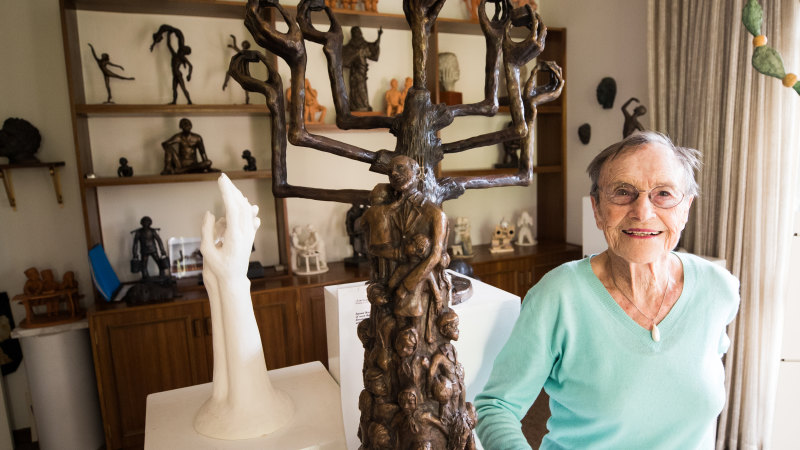 ‘I said to the Gestapo man, I am Jewish and you can shoot me’

Sarah Saaroni swam laps at her local pool in Kew every day until the COVID-19 restrictions forced it to close. The 93-year-old does not complain or want restrictions lifted too soon. She swapped the exercise she loves for an hour on her indoor bike, and when the pandemic has subsided she will return to swimming.

Sarah knows better than anyone what it means to live in lockdown, to feel repression and have liberties removed. In 1942, aged 16, the then Sarah Fiszman was living in Germany posing as a Polish Christian when she was betrayed by a friend who revealed she was Jewish. She was captured by the Gestapo, imprisoned, interrogated and condemned to the second-largest concentration and extermination camp, Majdanek in Poland.

Sarah, who now lives in Hawthorn, had a happy childhood with her parents, two brothers and sister in the town of Lublin, Poland. However, in September 1939 the Nazis invaded and the then 13-year-old schoolgirl had her life brutally upended.

“One day I was a little girl, protected, loved, spoiled; the next day I had to be an adult,” Sarah says.

The Jewish people were evicted from their homes and forced to move into a Jewish ghetto, where living conditions were horrific.

“The ghetto was just a few blocks in the slum area. It was dirty, no running water – people were hungry, there were epidemics, people were dying by the hundreds,” Sarah says. “At that time regardless of what we saw we still could not believe in it; it was too horrible to comprehend. We did not believe they would kill all of us, who would do a thing like that. A nation like the Germans – they won’t be killing babies, children, women, all the people.

Read the article by Caroline Hartnett in the Brisbane Times and The Age.