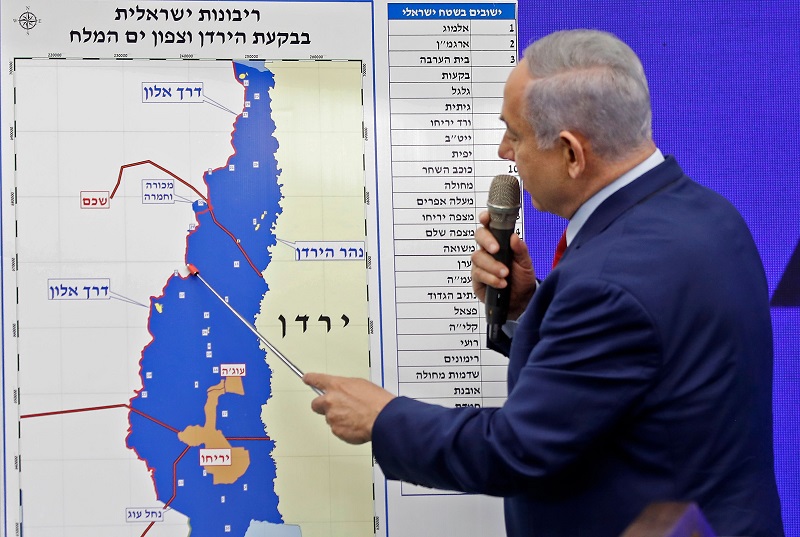 Israeli Prime Minister Benjamin Netanyahu points at a map of the Jordan Valley as he gives a statement in Ramat Gan, near the Israeli coastal city of Tel Aviv, on September 10, 2019. - Israeli Prime Minister Benjamin Netanyahu issued a deeply controversial pledge on September 10 to annex the Jordan Valley in the occupied West Bank if re-elected in September 17 polls. He also reiterated his intention to annex Israeli settlements throughout the West Bank if re-elected, though in coordination with US President Donald Trump, whose long-awaited peace plan is expected to be unveiled sometime after the vote. (Photo by Menahem KAHANA / AFP)MENAHEM KAHANA/AFP/Getty Images

‘To annex or not to annex’ sums up the dilemma facing the Israeli prime minister. US President Donald Trump’s Middle East ‘peace plan’ has given Benjamin Netanyahu the green light to annex around 30% of the West Bank, including the strategically important Jordan Valley. It came as a boon both for the settlers’ lobby and for Netanyahu personally.

The plan legitimised Israeli settlements in the occupied territories and was a step towards eliminating the two-state option. It was also a timely gift for Netanyahu, who has been fighting for his political life. The plan added to his image among Israelis as being principally responsible for persuading Trump to move the US embassy from Tel Aviv to Jerusalem and endorse the Israeli annexation of the Golan Heights.

If Netanyahu succeeds in annexing even a part of the West Bank to Israel it will consolidate his right-wing base and make it impossible for a challenger to emerge within his Likud party. The publicity around annexation has also helped to divert public attention from the corruption charges for which he is on trial. Finally, annexation will cement his place in history as the person responsible for fulfilling Zionist leader Ze’ev Jabotinsky’s dream of a greater Israel extending across both sides of the Jordan River.

With these considerations in mind, Netanyahu had set 1 July as the date to announce the annexation of at least a portion of the territories assigned to Israel by the Trump plan. He was in a hurry to do so before the US presidential election in November; while Joe Biden is a fervent supporter of Israel, he has expressed opposition to the annexation plan.

However, Netanyahu appears to have run into obstacles that have forced him to delay the announcement. First, he’d counted on Israel’s burgeoning economic and technological relations with the Gulf states to mute their criticism, and he was surprised that their reaction was more severe than he expected.