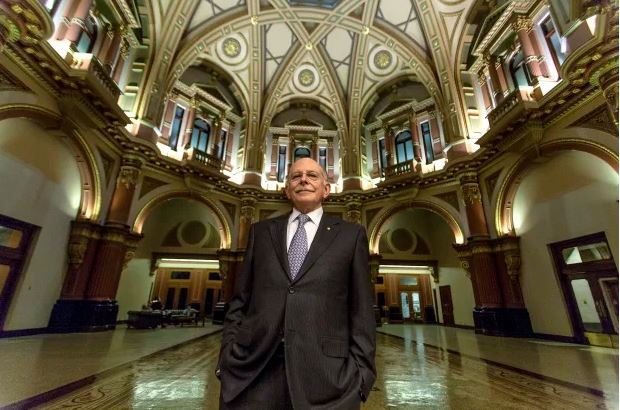 How Mark Leibler exercises his power and influence

The eminent lawyer with many friends in high places reveals how he became a formidable advocate for the Australian Jewish community and other causes such as Aboriginal rights.

Mark Leibler sits alone in his office at Arnold Bloch Leibler, the law firm where he’s been a partner since 1969. It’s in the magnificent former Commercial Banking Company building on Melbourne’s Collins Street. He’s wearing an open white shirt, grey trousers and black shoes. Like other 76-year-old men used to a career working in offices, he ruminates about the challenge of remembering how to knot a tie in this tieless age.

The father of four and grandfather of 14 is an expert in tax law, and many of his clients populate the upper reaches of the Financial Review Rich List; he’s also a prominent leader in the Australian Jewish community. However, it’s his behind the scenes influence that marks him out. It stretches right to the top of major Australian company boardrooms, through the Australian Tax Office (ATO), to the apex of this country’s and Israeli politics, including a close relationship with Israel’s powerful intelligence agency, Mossad.

He has a history of close, first name, relationships with just about every Australian prime minister dating back to Malcolm Fraser, every Israeli prime minister from Menachem Begin on, not to mention foreign ministers in both countries, sundry Australian taxation commissioners, and powerful business figures such as Frank Lowy, John Gandel and Solomon Lew.

To exercise power and influence, Leibler says, “it’s terribly important to put oneself into the shoes of the guy you’re talking with – an ATO official, or a prime minister or a senior bureaucrat. What is it that they’re thinking? What are their positions and how far are they going to go to accommodate you? It’s important to understand how things work.”

Read the article by Andrew Clark in the Australian Financial Review.