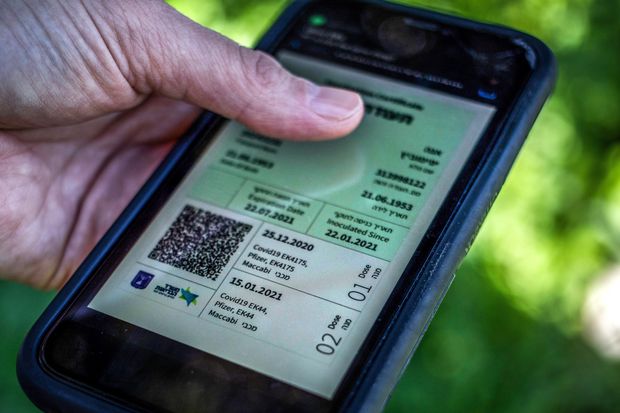 Israel has extended its COVID-19 vaccine passport system to children who aren’t yet eligible to be inoculated, allowing them to visit cinemas, restaurants and other entertainment businesses as it continues to reopen its economy.

Under the program, children with negative PCR tests will be eligible for a three-day so-called green passport that will be associated with their parents’ passes. The passports take the form of a QR code that can be carried on a smartphone, though their use isn’t always enforced.

Religious-affairs ministry officials had stipulated that only those carrying a green passport could attend a religious festival on Thursday at Mount Meron, where dozens of people were killed in a stampede, but health officials had said it would be impossible to check the status of those attending.

Organisers estimated that some 100,000 people were at the site by midnight.

The country of nine million has led the world’s fastest vaccination program, with nearly 75 per cent of its eligible population fully vaccinated.

But given a lack of clinical trial data for children, policy makers haven’t yet extended the campaign to those under 16, meaning about 2.6 million aren’t eligible to be vaccinated.

This has limited the extent to which Israel can reopen its economy without causing further outbreaks. Israel says its solution is a stopgap measure until medical trials demonstrate that children can be safely vaccinated against the virus.

Other countries with high vaccination rates, such as the US and the UK face similar problems. Herd immunity requires between 70 per cent and 85 per cent of a population being protected, health officials say, and this is impossible in countries like the US and Israel if children aren’t vaccinated. Children under 16 account for 22 per cent of the current US population.