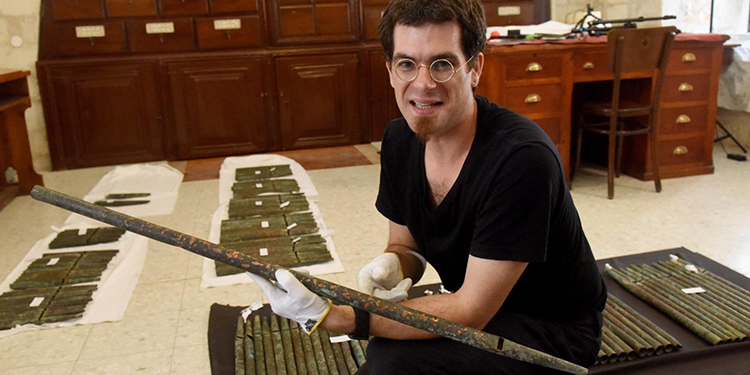 FROZEN in time, like a “musical Pompeii,” the 221 remaining original organ pipes from the Church of the Nativity in Bethlehem may fill a gap of knowledge of more than three centuries in the history of the organ and its cultural context, medieval church culture, music and technology.

“This organ dates from the 12th century and is a unique specimen in the world,” musicologist and historian David Catalunya said, a research fellow at the University of Oxford.

Mr Catalunya was in Jerusalem this summer to conduct a preliminary study on the pipes.

The next phases of the research will involve a larger team performing the scientific study of the pipes, including metal analysis, 3D scanning, and a CT scan.

One aim of the project is to replicate the original pipes and reconstruct the organ’s missing parts, so that its sound can be heard again after 800 years.

The organ pipes were discovered, along with bells and other liturgical ornaments, in an archaeological excavation at the Franciscan monastery of the Church of the Nativity in 1906 and were brought to Jerusalem under the care of the Franciscan Custody of the Holy Land.

The objects were stored for more than a century in the Studium Biblicum Franciscanum and will be displayed at the new Terra Sancta Museum in Jerusalem.

Read the article in The Catholic Leader (CNS).