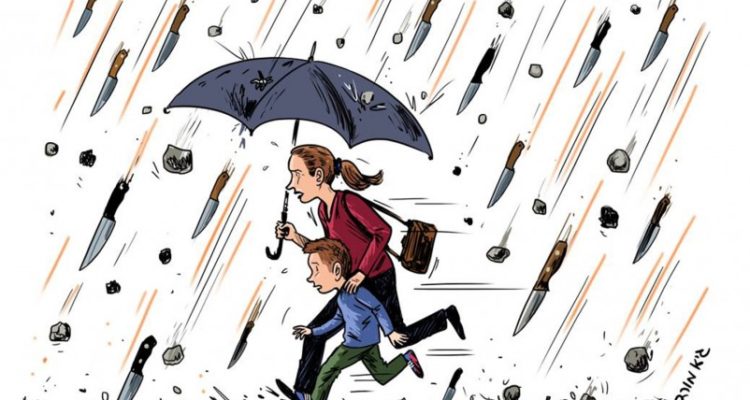 Who's doing the killing?

On July 3rd there was an interview on the Palestine Remembered radio program with Baha Hilo, a Palestinian activist, who was a guest on that program to talk ostensibily about the murder of Nizat Banat by the Palestinian Authority, a hugely significant event in the Palestinian arena, which has not been covered anywhere by our misshapen ABC, whose coterie of anti-Israel journalists seem to only like publishing material damning of Israel.

During the interview with Hilo he made a remark that occasioned a complaint and JMedia has received a copy of the complaint that was sent to 3CR:

It is unfortunate that I am compelled yet again to complain about an episode of the ‘Palestine Remembered’ program that was broadcast on 3CR on July 3rd.
I refer in particular to remarks made by the guest on the program Baha Hilo at the 15:32 min mark:
“The number, the estimation of Palestinians that were murdered in Palestine during the past 70- years exceeds 150,000 people, (affirmatory noise by Robert Martin) you know for a small country, 150,000 were murdered primarily by the state of Israel”.
This is a gross distortion of the facts and is used wilfully to demean the state of Israel and breed hatred in violation of the Community Radio Broadcasting Codes Of Practice 3.3.
According to a Wikipedia article ‘Palestinian casualties of war‘ the total number of casualties for the period 1948-2014 was 63,543, including 31,227 fatalities. Total Palestinian deaths as reported by the UN for the period 2008-2020 is 5590.

Another article on Quora addresses the question ‘How many Palestinians have been killed since the formation of Israel in 1948?‘ and the numbers suggested there go nowhere near what has been claimed on this episode of ‘Palestine Remembered’. In any case the number of supposed Palestinians deaths since 1948 can in no way be construed as being by murder alone, with Palestinians having perished in many diverse ways – as combatants in war, terrorism, suicide bombings and violent attacks against Israeli authorities.
Therefore, according to the Community Radio Broadcasting Codes Of Practice, this episode of Palestine Remembered has breached the clause 3.6 (b), as it clearly fails to “present factual material accurately and ensure that reasonable efforts are made to correct substantial errors of fact as quickly as possible”.
As a result of the Palestine Remembered program having permitted an unsubstantiable accusation, which amounts to a malicious lie to go unchallenged, I request that the presenters of this episode be compelled to make a public retraction.
Yours sincerely,
Joseph Silver
As a result of this complaint the matter has been investigated by 3CR in accordance with the community radio Broadcast Codes of Practice and a letter was sent to the complainant a few days ago. 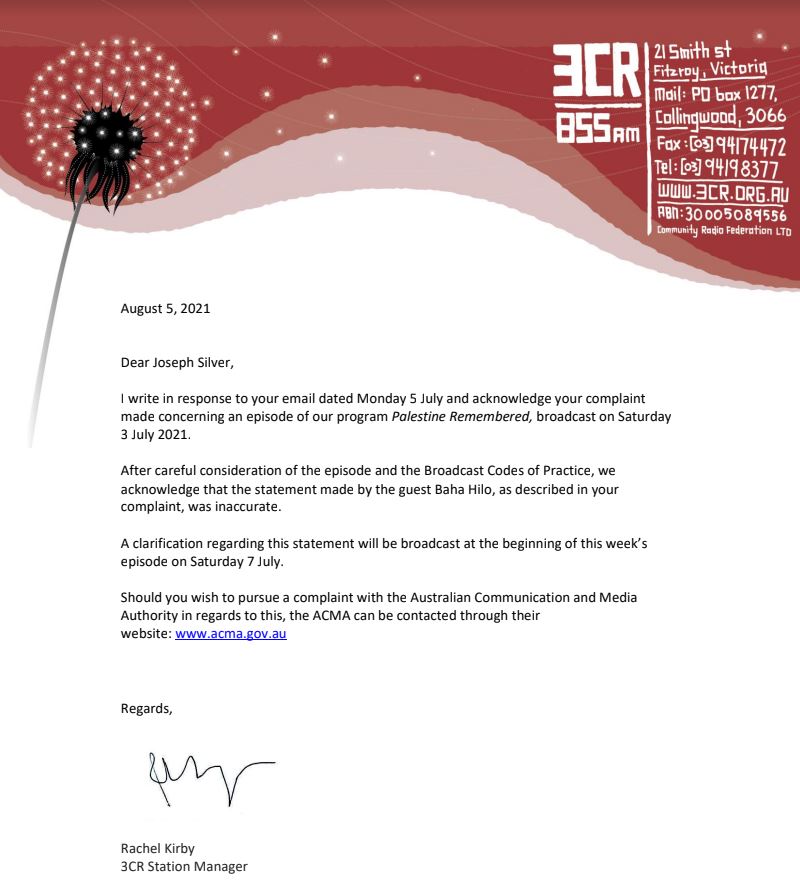 The mealy-mother clarification that was broadcast at the beginning of the latest episode of ‘Palestine Remembered’ can heard here.

There is certainly much to complain about on this nasty program, that pushes the barrow of Palestinian victimhood week after week, the presenters lacing their Israelophobic remarks incessantly  with anti-Zionist tropes and pro-Palestinian lies and propaganda.

Getting them for once to acknowledge one of their malfeasances is a small victory admittedly but it should encourage advocates of truth to keep pursuing these purveyors of falsehoods.