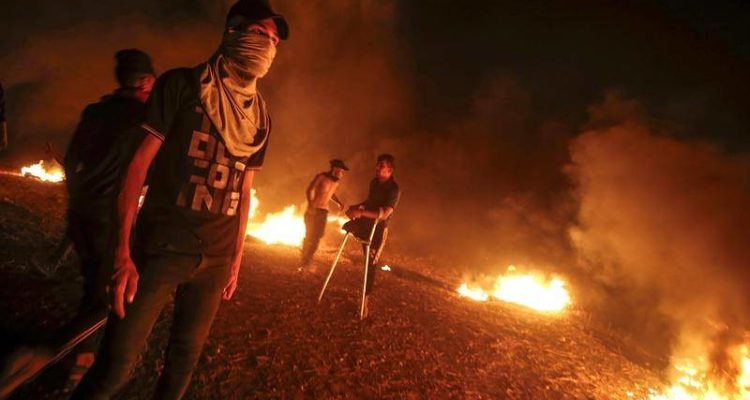 Hundreds of Hamas-backed activists have launched what they said was the first in a series of night-time protests along the Israeli border, throwing explosives toward Israeli forces who responded with live fire.

Organisers said the gatherings, which are to continue throughout the week, were meant to step up pressure on Israel to ease a crippling economic blockade on the Gaza Strip.

“The occupation will not enjoy calm unless the siege on our beloved land is lifted,” said Abu Omar, a spokesman for the protesters.

Israel and Egypt have maintained the blockade since Hamas, a group sworn to Israel’s destruction, seized control of Gaza in 2007, a year after it won Palestinian elections.

The blockade, which restricts the movement of goods and people in and out of Gaza, has ravaged the territory’s economy. Israel has tightened the closure since an 11-day war in May, demanding the return of the remains of two dead soldiers and freedom for two Israeli civilians believed to be in Hamas captivity.

Amateur footage and photos from inside Gaza showed hundreds of Palestinians protesters engaged in Saturday’s gathering. Some appeared to be throwing explosives and chanting in celebrations as blasts sounded.

The Israeli military said troops responded to the explosives by firing live rounds toward the protesters. It said there were no injuries on the Israeli side.

Read the article by Wafaa Shurafa in the Gloucester Advocate.