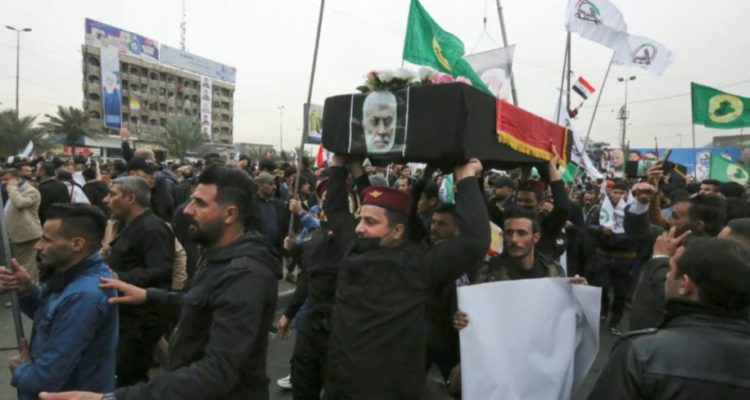 Thousands rally in Iraq to mark 2020 killing of Iran general

Jmedia Manager
Print
January 3, 2022 70
Thousands of supporters of an Iraqi alliance of armed groups Saturday marked the upcoming second anniversary of a US drone strike that killed a revered Iranian commander and his Iraqi lieutenant.

Chanting “Death to America”, the Hashed al-Shaabi loyalists filled a Baghdad square to honour Iranian General Qasem Soleimani, who headed the Quds Force, the foreign operations arm of Iran’s Revolutionary Guards, until his death on January 3, 2020.

“US terrorism has to end,” read one sign at the rally by backers of the pro-Iranian Hashed, a Shiite former paramilitary alliance that has been integrated into Iraq’s state security apparatus.

Hashed supporters, some with their children, marched into a square in central Baghdad that was closed off to traffic, an AFP correspondent said.

Since then dozens of rockets and roadside bombs have targeted US security, military and diplomatic sites across Iraq.

In February last year, the US carried out an air strike against Kataeb Hezbollah, an Iranian-backed Iraqi paramilitary force stationed along the Iraqi-Syrian border, following rocket attacks on its Baghdad embassy and a US military contracting firm north of the capital.

The Sunni extremists seized around a third of Iraq in a lightning 2014 offensive, but were beaten back by both the US-led coalition and the Hashed, before Baghdad declared the jihadists defeated in late 2017.