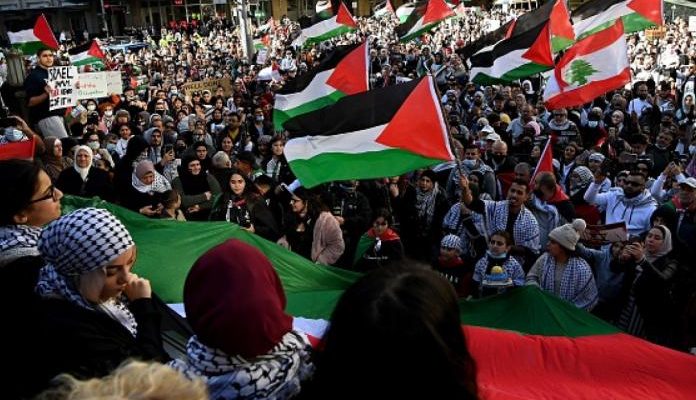 Demonstration against Israel at the Sydney Town Hall, May 2021 (Getty)

Sharing the statement from Artists Against Apartheid calling on the Sydney Festival to drop its $20,000 sponsorship deal with the Israeli embassy and not to “artwash” Israel’s human rights abuses and apartheid regime, Barkaa went on to say: “We as a nation live in a time where we should know better, so we should do better”.

Barkaa’s withdrawal came a day after Aboriginal journalist Amy McGuire also publicly announced her withdrawal on Twitter. McQuire, a Darumbal/South Sea writer and activist, noted that she “was supposed to appear on a panel for Sydney Festival called ‘Goodbye misogyny’” but had “decided to pull out and join Palestinian calls to boycott the festival”. McQuire went on to criticise the festival board’s attempt to deflect criticism about its partnership with the Israeli state, saying that their claim to be “apolitical” was “shameful”.

While more than 100 artists and creatives have now withdrawn from the festival, including high profile acts such as Tom Ballard and Judith Lucy, Aboriginal artists and artists of colour have been at the forefront of the solidarity efforts with Palestine. In the past weeks, Barkaa and McQuire have been joined by Wiradjuri visual artist Karla Dickens and the Marrugeku Indigenous Dance Troupe. Speaking on the Project about why Aboriginal artists had chosen to withdraw, McQuire explained that it was because of the “connections we see as fellow Indigenous populations living in a settler colonial society”.