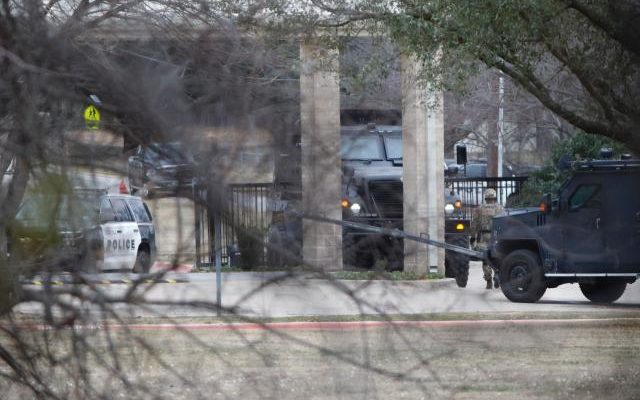 Gunman who held a rabbi and three others hostage at a Texas synagogue was from the UK, the FBI says. (Elias Valverde/AAP)

A gunman who took four people hostage at a Dallas-area synagogue and was himself killed as federal agents stormed the temple has been identified as a British citizen, while police in England say they have detained two teenagers for questioning in the investigation.

The day-long siege at the Congregation Beth Israel synagogue in Colleyville, about 25 kilometres northeast of Fort Worth, Texas, ended on Saturday night with all four hostages released unharmed and with the suspect dead.

It was not clear whether the gunman took his own life or was slain by members of the FBI hostage rescue team.

The suspect was reported to have demanded the release of a Pakistani-born scientist serving a federal prison sentence in the Dallas-Forth Worth area during 10 hours of tense hostage negotiations with authorities.

The FBI on Sunday identified the suspect as Malik Faisal Akram, 44, a UK citizen, but did not say how or when he entered the United States.

Akram’s brother Gulbar posted on Facebook that the suspect, from Blackburn in northern England, suffered from mental illness and said the family had spent all night at the Blackburn police station “liaising with Faisal, the negotiators, FBI etc”.

“There was nothing we could have said to him or done that would have convinced him to surrender,” Gulbar wrote on the Blackburn Muslim Community’s Facebook page.

He said the FBI was due to fly into the UK “later today”.