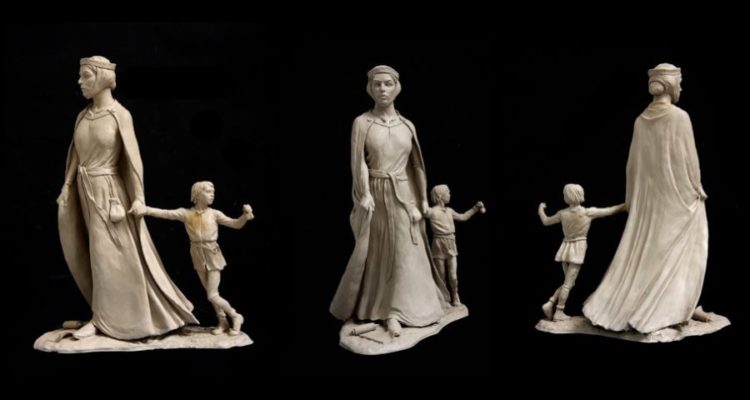 A variety of angles of the Licoricia of Winchester statue model. (Licoricia.org)

She was one of the most wealthy financiers of her day, known to the kings of England and described as the most important Jewish woman of medieval England. She was also brutally murdered in what may have been a 13th-century hate crime.

Now, a statue of her is to be unveiled in the historic city of Winchester to both celebrate her achievements and alert people to the dark and often forgotten anti-Semitic past of Britain.

Licoricia of Winchester was a major financial backer of three English kings – John, Henry III and Edward I – and was well-known in Winchester, the city in southern England where she lived and raised her family. Despite her status as a respected, prosperous businesswoman, it is suspected that her fatal stabbing in her home in 1277 may have been inspired by prejudice.

The lifesize bronze of Licoricia, which will be unveiled by the Prince of Wales in a ceremony next month, was designed by the sculptor Ian Rank-Broadley, who created the statue of Princess Diana unveiled in London last July. Licoricia’s statue will be blessed by Britain’s chief rabbi, Ephraim Mirvis.

Organisers of the fundraising effort for the statue, who are backed by the Anglican Winchester Cathedral, say that they want to highlight the existence of Jewish communities in medieval England and their achievements, to celebrate Licoricia as a role model and to recognise the impact and influence of anti-Semitism in England.

Maggie Carver, chair of the fundraising appeal, said: “A number of prejudices about Jewish people that still exist today, including claims about money and the blood libel, derive from England at that time. By throwing a spotlight on them through the erection of this statue we want to explain the history of these prejudices and help get rid of them.”

Read the article by Catherine Pepinster in Sight Magazine.