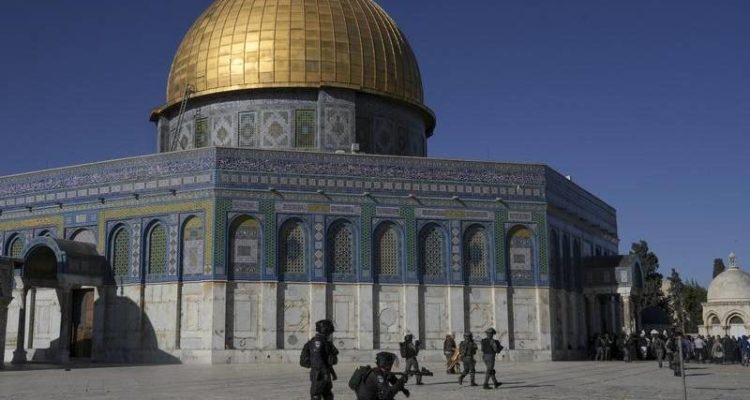 Israel is enforcing its ban on Jewish prayer at the Al-Aqsa mosque compound in Jerusalem.

Israel is enforcing a long-standing ban on Jewish prayer at the compound of Al-Aqsa mosque in Jerusalem, rejecting an Arab League accusation that it was allowing such worship to take place.

Violence at the compound, revered in Judaism as the Temple Mount and by Muslims as the Noble Sanctuary, has surged over the past week, raising concerns about a slide back into wider Israeli-Palestinian conflict.

Israeli security forces have been on high alert with the Muslim holy month of Ramadan coinciding with the Jewish holiday Passover and Christianity’s Easter.

The Arab League said Israel has broken the status quo and was allowing Jews to pray at the compound, calling it a “provocation”.

Israel, however, said there has been no change in its long-standing ban on Jewish prayer at the flashpoint site.

“Israel is maintaining the status quo, which includes the freedom of prayer for Muslims and the right to visit for non-Muslims. The police enforce the ban on Jewish prayer,” Lior Haiat, a spokesman for Israel’s Foreign Ministry, said on Thursday.

“Over the last few years, Israel is not allowing Jews to visit the Temple Mount during the last 10 days of Ramadan to prevent any friction,” he said.

That 10-day period starts on Friday.

Read the article by Ari Rabinovitch, Nidal Al-Mughrabi and Ali Sawafta in The Canberra Times.