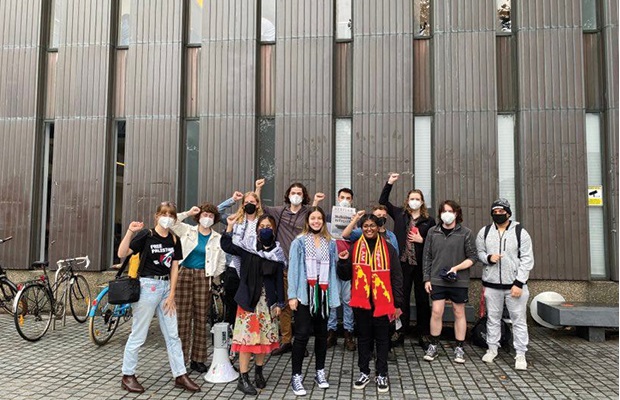 Students gathered outside Fisher library yesterday afternoon to call for an end to Israeli occupation of Palestine.

Organised by USyd group Students for Palestine, the rally followed the latest assault by the Israeli state on Palestinian citizens at the Al-Aqsa Mosque Compound in East Jerusalem last Friday.

Ban Hasanin of Students for Palestine called out the flagrant human rights violations under Israel and criticised the piecemeal outrage on settler colonialist states, where there was a failure to recognise Palestinian oppression.

“You cannot claim to condemn violence but choose to remain silent on the atrocities and appalling footage we’ve seen of the complete degradation of Palestinians. We’ve seen worshippers tied up on the floor, women locked up, tear gassed, and rubber bullets fired,” Hasanin said.

Students for Palestine President Owen Marsden-Redford decried the military domination of Israel and underlined the anti-apartheid struggle of Palestine as a “fight for the liberation of Palestinian people.”

He also paid tribute to Pro-Palestinian activist and member of International Solidarity Movement Rachel Corrie, who was crushed to death by an Israel bulldozer while trying to stop the demolition of a Palestinian home in the Gaza Strip in 2003.

Read the article by Christine Lai in Honi Soit.