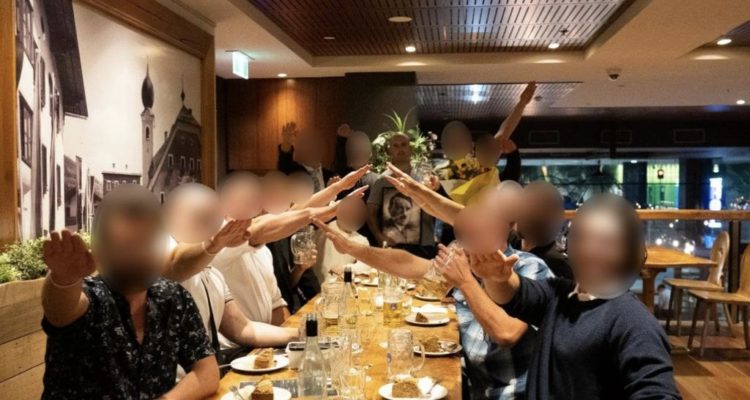 Tom Sewell, holds a photo of Adolf Hitler at The Hof Downtown Bavarian beer hall in the Docklands, while junior members of his racist group perform Nazi salutes.

Melbourne neo-Nazis openly celebrated Hitler’s birthday with a swastika cake after duping a beer hall into hosting the offensive gathering.

A group of neo-Nazis duped a Melbourne beer hall into hosting a celebration of Adolf Hitler’s birthday in the latest demonstration of just how brazen far-right wing groups in Australia have become.

Photos, circulated on a far-right online chat group, show notorious racist figure Tom Sewell holding a portrait of Hitler at the head of the table at Bavarian beer hall The Hof Downtown in the Docklands on the evening of April 20.

His group made a large booking at the venue under a false name and repeatedly made Nazi salutes while drinking beer and eating cake.

They also posted a series of photos online of celebrations elsewhere, which included a cake that had been decorated with a swastika drawn in coloured icing.

The group, which is being closely monitored by national security agencies, blurred all of its members’ faces other than Sewell’s before posting the photo online.

The brazen, public nature of the gathering has prompted renewed calls for the rag-tag white supremacist groups operating in Australia to be designated as terrorist organisations.

Read the article by Suzan Delibasic and Craig Dunlop in the Herald Sun.