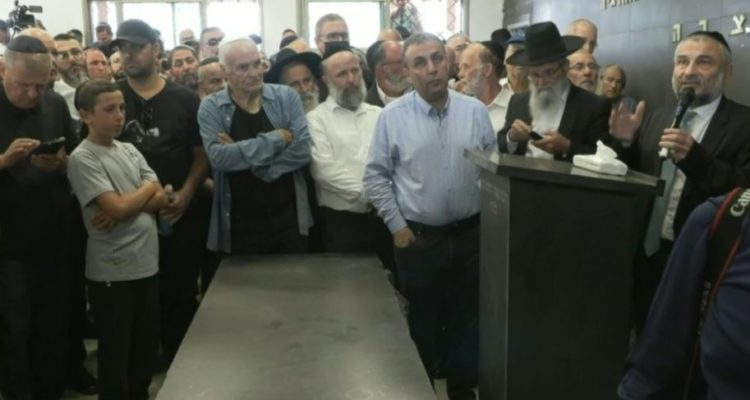 Mourners pay their respects during a ceremony for Oren Ben Yiftah, a 35-year-old from the central city of Lod, who was killed in a Palestinian attack in Elad, a city mainly populated by ultra-Orthodox Jews, as the Jewish state marked its founding. Israeli security forces launched a manhunt Friday for two Palestinians suspected of killing three Israelis.

Jmedia Manager
Print
May 7, 2022 30
Israel conducted a large-scale manhunt on Friday for a pair of Palestinians suspected of killing three Israelis in an axe attack as the Jewish state marked its founding.

The deadly attack on Thursday night in Elad, a central city mainly populated by ultra-Orthodox Jews, was the sixth in which Israelis have been targeted since March 22.

The attack followed a tense period in which the Muslim fasting month of Ramadan, the Jewish festival of Passover and the Christian holiday of Easter overlapped.

Palestinians have been angered by an uptick in Jewish visits to the Al-Aqsa compound, where by longstanding convention Jews may visit but are not allowed to pray.

The United States and Palestinian president Mahmud Abbas condemned the attack. Abbas warned it could lead to spiralling violence.

“This operation demonstrates our people’s anger at the occupation’s attacks on holy sites,” Hamas spokesman Hazem Qassem said of the Elad attack.

As helicopters and drones patrolled overhead in search of the perpetrators, young ultra-Orthodox Jewish men in crisp white shirts were seen linking arms and chanting near the scene of the murders.

A 31-year-old IT worker who gave his name as Yehuda told AFP he was afraid that “the killers have not yet been caught”.