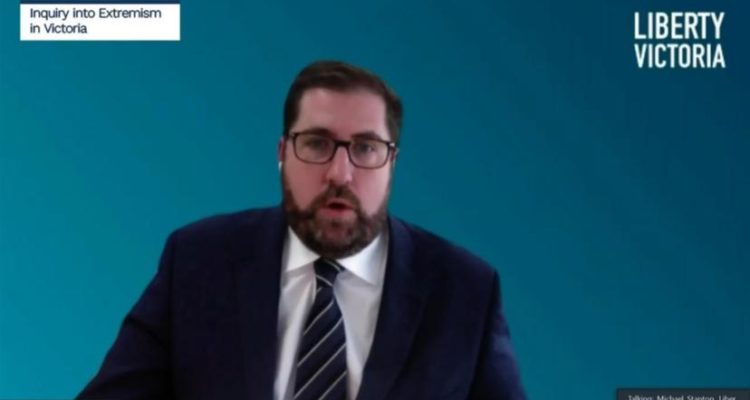 Michael Stanton says the focus of law enforcement agencies has been drawn away from neo-Nazis. (AAP)

A “myopic” focus on Islamist extremism in Australia has set back efforts to curb the far-right movement, a Victorian parliamentary inquiry has been told.

Victoria’s Legal and Social Issues Committee is investigating the recent emergence of far-right extremism, including neo-Nazis gathering in the Grampians and gallows erected outside state parliament as pandemic legislation was debated last year.

Liberty Victoria President Michael Stanton acknowledged far-right extremism is real but suggested politicians must be careful not to blindly expand executive powers, surveillance and censorship to combat its influence.

“We need to make sure that in responding to those confronting scenes in the Grampians … or the erection of gallows outside parliament, that we do not have a legislative response that throws the baby out with the bathwater,” Mr Stanton said.

“Sometimes that involves tolerating speech that we find offensive or humiliating.”

The barrister said Australian law enforcement agencies and politicians’ focus has been drawn away from neo-Nazis and other right-wing movements over the past 20 years by Islamist extremism.

“Since September 11, 2001 we have responded with a succession of draconian legislative responses to the threat of terrorism,” he said.

“The question that all raises is: are we safer?”

Read the article by Callum Godde (AAP) in The West Australian.