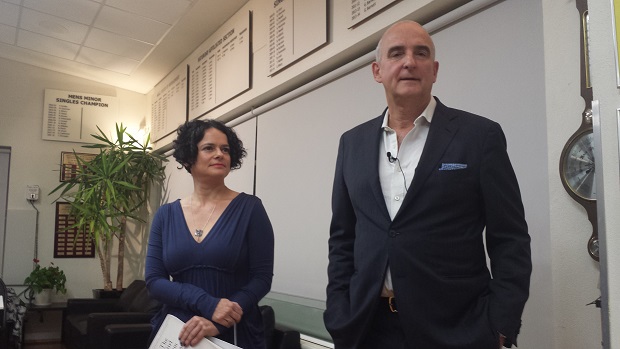 Award-winning journalist and author Roger Cohen is said to be one of the most talented, hard-hitting international reporters today having worked for The New York Times for 25 years as a foreign correspondent, foreign editor, and now columnist; prior to that he worked for The Wall Street Journal and Reuters.  He spoke with journalist Julie Szego about Israel/Palestine, European Jewry, the Iran nuclear deal, Islamism and antisemitism.

Julie Szego, writer and Fairfax columnist, has worked at The Age for 12 years and wrote a column for The Australian Jewish News for seven years. She made sure that Roger Cohen didn’t get an easy run.

To start with the contentious appointment of Avigdor Lieberman as defence minister was dismissed by Cohen as not really making much difference ultimately to the overall situation in Israel.

Cohen was born in London after his father had emigrated from South Africa. He has Lithuanian roots but no real knowledge about his ancestry. He acknowledged that Jews in Britain tend to speak in whispers, apprehensive of jeopardising their identities to an endemic undercurrent of antisemitism in British society, which he suggested is getting better. He especially bemoaned the tendency of the anti-Israel Left to be bandering around terms like ‘Zio’ about Jews who support Israel, alluding to this having been done by the Ku Klux Klan originally to demean Jews.

Julie Szego asked about the shoddy figures that Bernie Sanders had used, when he had criticised Israel over its supposedly disproportionate attack against in Gaza in 2014. Cohen glossed over the facts that Bernie Sanders had misrepresented, Sanders even being accused of spreading a malicious blood libel about Israel. Cohen apparently adheres to the dictum of expediency “the end justifies the means” claiming that the important thing here was that it steered American policy away from support that was too much in favour of Israel. To Roger Cohen his agenda matters more than the plain facts.

On Obama Cohen reckons that he has not done particularly well in the Middle East but he thinks that Obama is a pretty smart guy and he admires Obama’s policy achievements with Cuba and Iran.

When it comes to Iran more is revealed about the kind of politics that Cohen embraces. Cohen believes that the Iranian people are really very open to the West and he fondly recalls a bustling encounter he had while travelling by bus in in Iran. He believes the Jews have it pretty good in Iran; somebody should give Roger a copy of Kooshyar Karimi’s powerful book about being a Jew in Iran titled “I Confess”.

Cohen is very willing to denounce Islam when he wrote “Islam and the West at War” for the New York Times, but he doesn’t connect the dots to admit that it is a strain of the same dark ideology of Islamism he bemoans in Europe and across the Arab world that has been threatening Israel’s very existence as a Jewish state for a very long time. He admits that it was unique that he, as a representative from the Left spoke out and admonished extreme Islam, when it is generally those of the Right or Conservative side of politics who do that.

There was no mention whatsoever of the incitement that has been sparked against the Jews in Israel since last September with fearmongering that Jews were threatening to desecrate Al-Aqsa. Cohen was there to witness the total failure of the Arab Spring but he doesn’t really assign responsibility for that to anyone.

Cohen then let rip at messianic Zionism saying it was to blame for preventing a resolution of the conflict with the Palestinians. Cohen reminds us that there is a Palestinian narrative of which we need to be aware, but he doesn’t seem to care whether that narrative is made up of myths and falsehoods .

On the issue of Iran once again we hear Cohen’s agenda getting in the way of the facts. The Iranian inspection regime of the Iranian nuclear programme is adequate as far as he is concerned. In fact Iran can easily breach the deal which has Teheran inspect its own covert nuclear facilities such as Parchin, requiring a notice of 24 days before international inspectors can access such sites, plenty of time for Iran to disguise any nuclear weapon development. For Cohen once again it is the most expedient thing to do to be making a deal with Iran; they would have got the nuclear bomb whatever sanctions were administered against Iran so why bother to stop them? It is better to be talking to Iran instead of no dialogue at all, says Cohen.

It was now my turn to challenge Roger Cohen and I got out of my seat to take the microphone. I reminded Roger what he had said about the 1947 Partition Plan for Palestine and what he had said about it ultimately being unfair to the Palestinians to have been contending for around 50% of the land only to find today that the percentage of the land in their control today has dwindled to 22%.

I told Roger that the UN Partition Plan had only been a recommendation by the United Nations General Assembly and held no weight by international law. On the other hand the 1922 League of Nations, a treaty firmly bedded in international law, gave Jews the right to settle anywhere between the river and the sea. 78% of the original Palestine Mandate however was handed over to Transjordan which is in fact a proxy for a Palestinian state today with a population that is 70% Palestinian in origin. I asked Cohen why Jordan didn’t figure in the configuration of a solution and I was told that idea is a matter of opinion. Once again Cohen showed he prefers his own agenda of appeasement, his stance of unwitting compromise, to the facts.

My conclusion from hearing Roger Cohen’s prognostications was that he follows an agenda that is predicated on appeasement and assuagement of the anti-Israel camp instead of the truth. Roger dodged around the facts throughout his address to an audience of a hundred or so, comprising mostly NIF supporters. I would hope that critically-minded people would have left the meeting not totally convinced by Rogen Cohen. I certainly wasn’t.

[This article has been written by David Schulberg]