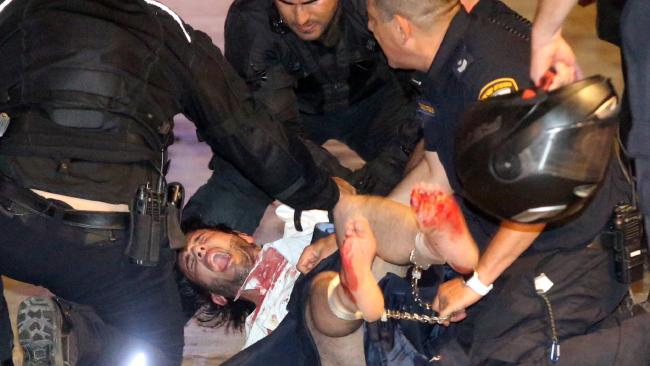 Israel last night clamped down on Palestinian movements and boosted security after two Palestinians shot dead four people at a popular Tel Aviv nightspot, the deadliest attack in a months-long wave of violence.

Officials said they were ­suspending entry permits for 83,000 Palestinians during Ramadan in a move that was likely to further stoke tensions following the Wednesday night shooting.

Police spokesman Micky ­Rosenfeld could not confirm reports the attackers were disguised as ultra-Orthodox Jews, but said they had been wearing black suits.

Prime Minister Benjamin Netanyahu visited the scene of what he called the “cold-blooded terrorist murder” after returning from a trip to Moscow and conferred with senior colleagues, including newly installed hardline Defence Minister Avigdor Lieberman.

“We discussed a range of ­offensive and defensive steps which we shall take in order to act against this phenomenon,” Mr Netanyahu said. “There will be intensive ­action by the police, the army and other security services, not just to catch every accomplice to this murder but also to prevent further incidents.”

Police said the attackers were cousins from Hebron in the West Bank, and one of the Israeli authorities’ first moves was to revoke tens of thousands of entry permits.

“All permits for Ramadan, ­especially permits for family visits from Judea and Samaria to Israel, are frozen,” said COGAT, the ­defence ministry unit that ­manages civilian affairs in the ­occupied West Bank.

Read the full story in The Australian