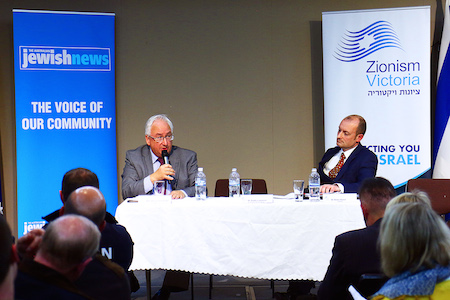 Melbourne Ports MP Michael Danby quipped it was a cold night to venture to Beth Weizmann Community Centre for Wednesday’s candidates’ debate with Liberal challenger Owen Guest. But it soon heated up, with claims and counter-claims about Israel, Iran, Greens preferences and security funding.

Add a windy pro-ALP heckler, and the event, co-hosted by The AJN and Zionism Victoria, and moderated by AJN national editor Zeddy Lawrence, was absorbing, even entertaining, despite audience questioners struggling to reach the question buried deep in their sermon.

Tackling Danby, Labor’s incumbent since 1998 in Melbourne Ports, the bayside seat that’s home to a large chunk of Melbourne’s Jewish community, and which has never been held by a Liberal in all its 115 years, has always been a formidable task.

Read the full report by Peter Kohn in the Australian Jewisah News.