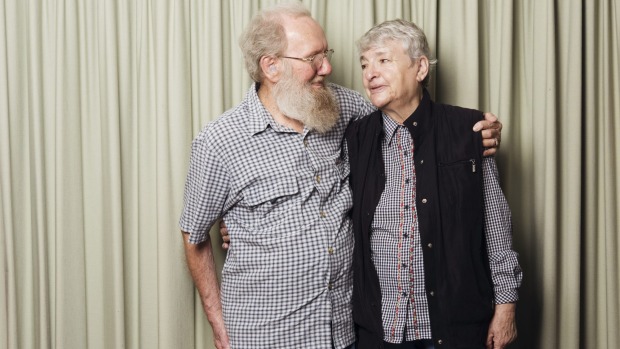 HANS: The first time we went to bed, Gina saw my blood-group tattoo under my arm. She asked, “What is this?”

Every man who went into the SS got this tattoo under his left arm, so if he got injured they could give him the right blood. This was the end of the matter for me, but for Gina it meant something different.

It was never a secret that I was in the SS but, because of the tattoo, everybody knows. It’s just an external thing. The point is, no matter what, I love her.

After the war in Germany, I married my first wife, Lydi. She was from an old communist family from Dusseldorf. Jews were our friends when I was growing up in a small town in Silesia, in eastern Germany.

GINA:  After Lydi died, I stepped in to help. My first marriage had ended – we had two teenage children at the time – and I really didn’t want any more connections. It’s hard enough managing your own life, let alone being with somebody else. Somewhere over my shoulder I felt Lydi saying, “Just look after the kids.”

Anyway, I went off to Israel for a year, and Hans wrote often to me. I wrote back, trying tactfully to let him down. Then he was with my son at the airport when I returned. I spent one night with my daughter then went to his house to tell him I didn’t want a relationship. I never returned. He’s a smooth talker.

We got married a year later, in 1976, to prove to his kids that we were a permanent arrangement, but it didn’t help to mend the relationships. They still don’t talk to us, I’m not really sure why. I think they felt abandoned after Lydi died. I don’t know and don’t much care.

Read the story by William Verity in the Canberra Times.