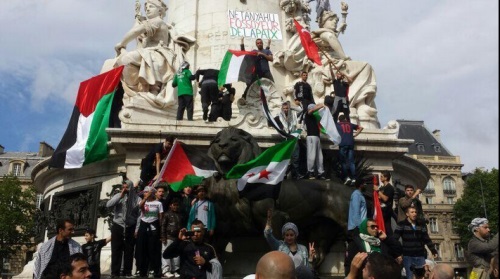 Ten years ago, a young woman entered a mobile-phone store on Boulevard Voltaire in Paris. She flirted with the salesman, Ilan Halimi, 23, a French Jew of Moroccan descent, asked for his number and suggested they meet the next day.

They did, at a local cafe – but it was a trap. A gang calling itself The Barbarians seized Halimi, took him to an apartment and kept him prisoner for 24 days. They tortured him, emailed a video to his sister showing him gagged and bound to a chair and demanded a ransom – as “Jewish people have money”.

Halimi was then stabbed, sprayed with an inflammable liquid, set on fire and dumped near a railway track. He was found barely alive with burns to 80 per cent of his body, but died en route to hospital. Gang leader Youssouf Fofana was sentenced to life with no parole for 22 years.

French Prime Minister Manuel Valls invoked the horrific incident during a blistering critique of the level of anti-Semitism that has become pervasive in his country. In an extraordinarily powerful speech to France’s National Assembly, he also cited the shooting of a rabbi and three children at Ozar Hatorah School in Toulouse, the shooting of four Jewish hostages at the Hyper Cacher supermarket and even the wartime deportation to Auschwitz of 76,000 French Jews with not a German soldier in sight.

“How can we accept that shouts of ‘Death to the Jews!’ can be heard in our streets?” he cried. “How can we accept that French people can be murdered because they are Jewish? I say to the national community … we can’t accept it, we must rebel … There’s this new anti-Semitism born in our neighbourhoods against the backdrop of the internet, satellite dishes, abject poverty and hatred of Israel, advocating hatred of the Jew and of all Jews. History has shown that a reawakening of anti-Semitism is the symptom of a crisis of democracy.

“Let’s say to the world: without France’s Jews, France would no longer be France! It’s up to us to proclaim this message loud and clear. We’re not outraged enough! How can we accept that in certain schools we can’t teach the Holocaust? How can we accept that a kid aged seven or eight, asked by his teacher ‘Who is your enemy?’ can answer ‘It’s the Jews?’ When the Jews of France are attacked, France is attacked, the universal conscience is attacked. Let’s never forget that!”

All of which segues to the anniversary that France marks today – of the storming of the Bastille in 1789, the prison that symbolised the repressive reign of Louis XVI. The incident was the opening act of the French Revolution, which heralded the national slogan “Liberty, Equality, Fraternity” and France’s Declaration of the Rights of Man.

Few among France’s 600,000 Jews – a disapora around five times that in Australia – don’t regard those lofty sentiments with cynicism and distrust, however, born of bitter experience dating back to the life sentence imposed on army captain Alfred Dreyfus in 1894 on a false charge of treason. It took 12 years for Dreyfus, who was Jewish, to be cleared by civilian court and 101 years – until 1995 – for the military to admit his innocence.

French Jews on the move

An integral feature of French society since the sixth century, France’s Jews have started moving. A total of 851 anti-Semitic attacks were recorded last year – more than double the 423 of 2014 – with 80 per cent of incidents going unreported. Jews comprise 1 per cent of the French population, yet over half of the reported hate crimes in 2014 were anti-Semitic.

Two key factors fuel this scenario – the increasing influence of the far-right National Front and resentment by immigrant and minority groups at the fact that they experience prejudice and struggle to integrate. The National Front placed first in the 2014 elections and in the first round of last year’s regional elections, and while party leader Marine Le Pen has condemned her father’s anti-Jewish world view, more than half of the respondents who support the party acknowledged anti-Semitic views in two surveys.

The number of Jews emigrating from France has soared from an average of 2000 over the previous several years to 13,000 last year – the highest rate out of Europe – while Jews are reluctant to identify as such in public, are transferring their children to private schools and teachers report anti-Semitic reactions when they teach the Holocaust and Jewish history.

Many quite simply do not see a Jewish future in France. Israel’s Jewish Agency has plans to relocate 50,000 French Jews within five years, while the Vidal Sassoon Centre for the Study of Anti-Semitism at the Hebrew University in Jerusalem predicts that European Jewry has but 10 to 20 years left.

This article by Vic Alhadeff (chief executive of the NSW Jewish Board of Deputies) was originally published in the Australian Financial Review.