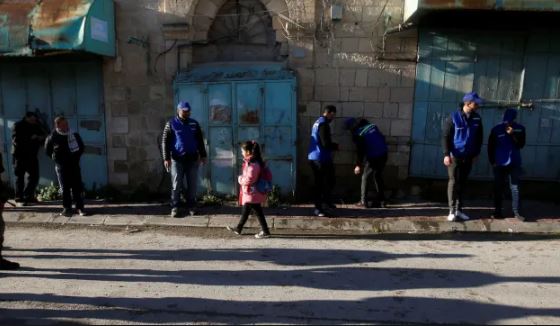 Damian Ridgewell, a Palestine solidarity activist, reports on the situation in occupied Hebron.

n downtown Hebron, the streets are thriving. Even as many are fasting and the early summer heat makes itself felt, the streets are full of people buying food for the night’s iftar, shopping for clothes, chatting.

Once we pass through the Israeli checkpoint to the old city, the contrast couldn’t be starker. The streets are silent. Shuhada Street, which we’re on, used to be a major commercial area, but after an Israeli settler massacred 29 Palestinians in 1994, the Israeli military closed the street to Palestinians.

I am being shown around by Badee Dwaik, whose organisation, Human Rights Defenders, films and documents the violence of the occupying soldiers and settlers. Badee shows me the steel doors that used to be markets and shops, now welded shut by the occupation.

In defiance of the humiliation and violence carried out by settlers and occupying soldiers, there are still Palestinian families living in the old city. Around 60,000 still live in the area, now under direct control of the Israeli military. In the heart of the city, about 500 Israeli settlers live in a colony called Tel Rumeida. In the hills surrounding Hebron, there are several thousand more settlers. I am told 2,500 Israeli soldiers are stationed here. The settlers regularly throw stones, garbage and excrement at local Palestinians. Steel cages are installed on the windows of Palestinian houses to protect them from settlers throwing stones. Settlers regularly graffiti the star of David on the front door of Palestinian houses.

We reach a part of Shuhada Street that separates the Palestinian area from the settlers. “There is no life for Palestinians down there”, explains Badee. Any Palestinians who enter the settler part of the street are arrested on sight.

Palestinians in Hebron experience a scale of violence and humiliation that is hard to fathom. I am shown the site where, in 2016, an Israeli soldier executed a wounded and incapacitated Palestinian boy, Abdel Fattah al-Sharif, by shooting him in the head. We know of this execution only because one of Badee’s colleagues secretly filmed it.

Read the article by Damian Ridgewell in Red Flag.