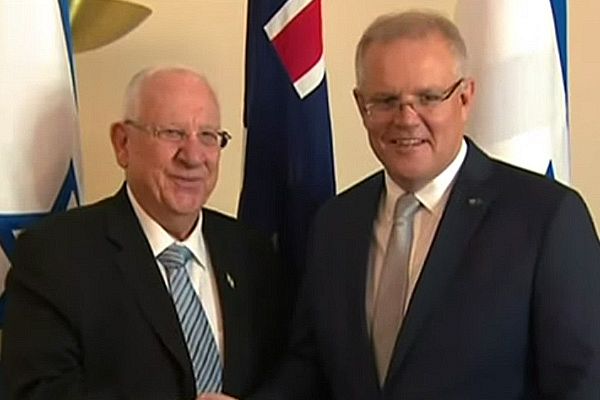 CAVEAT EMPTOR: Independent Australia who have published this piece of pro-Palestinian propaganda will not publish comments that don’t marry with their virulent anti-Israel point of view. Readers who would like a sane perspective on this subject are welcome to listen to my radio podcast with international lawyer Professor Gregory Rose, who has become involved in the case against Israel that is currently sitting with the International Criminal Court (ICC).]

A parliamentary speech has drawn attention to the Morrison Government’s willingness to turn its back on matters of international crime, writes Peter Wicks.

LAST WEEK in Federal Parliament, there was a speech that flew under the mainstream radar. Not because it didn’t cover an important topic – it did – but perhaps because it didn’t relate to coronavirus, sports rorts or toilet paper.

The speech in question only went for 90 seconds. But in that short time, it managed to shine a light on a part of the world with a largely ignored humanitarian crisis in progress and it also showed the Morrison Government is happy to not just turn a blind eye to international crimes but actually act to prevent their investigation.

The speech was by Labor’s Member for Corangamite, Libby Coker. For a first-term MP, it is an exceptionally brave move to go against the grain, put herself on the hit list of a powerful lobby group. She should be commended for having the guts for pulling the Government up over its hypocrisy.

The Morrison Government is soft on crime.

So much so that it has sought to block the prosecution of war crimes and human rights abuses still occurring in Palestine and the occupied Palestinian territories by the International Criminal Court. Not because crimes have not been committed, but because Australia does not recognise a Palestinian State.

There is apparent bipartisan support for a two-state solution. However, with undefined borders, Australia refuses to recognise the Palestinian State. Given the borders in question are shared, this also makes the Israel border undefined, but that logic apparently doesn’t apply to Israel, which Australia recognises as a state.

As far as our Government is concerned, Palestine is a dead zone. The land international law forgot.

In her speech, Libby Coker stated:

“The underpinning of a civilised world is not only Australian domestic law but also international law.”

The ICC prosecutor has spent the last five years investigating a huge number of criminal acts in the Palestinian State that Australia fails to recognise. These investigations were not only into Israeli crimes but also into crimes committed by Palestinians.

Read the article by Peter Wicks on Independent Australia.