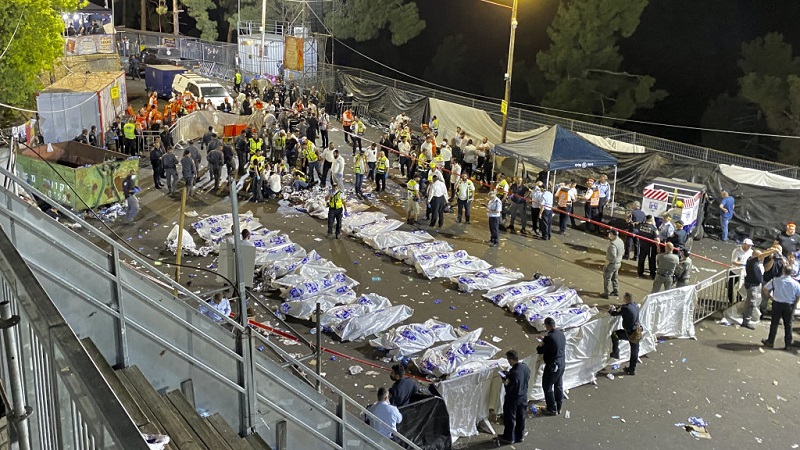 Jerusalem: At least 44 people were crushed to death and 150 injured at an over-crowded religious bonfire festival in Israel on Friday, in what Prime Minister Benjamin Netanyahu described as a “heavy disaster”.

The crush occurred as tens of thousands of ultra-Orthodox Jews thronged to the tomb of 2nd-century sage Rabbi Shimon Bar Yochai on Mount Meron in the Galilee for annual Lag B’Omer commemorations that include all-night prayer, mystical songs and dance.

Witnesses said people were asphyxiated or trampled in a tightly packed passageway, some going unnoticed until the PA system sounded an appeal to disperse, as crowds packed the mountain’s slope in defiance of COVID-19 warnings.

The stampede began when large numbers of people thronged the narrow tunnel during the event, according to witnesses and video footage. People began falling on top of each other near the end of the walkway, as they descended slippery metal stairs, witnesses said.

Eli Beer, director of an Israeli volunteer ambulance service, Hatzalah, said he was shocked by the size of the crowd at Mount Meron. Police were quoted as saying about 100,000 people were there.

He told Army Radio that there were four to five times the number of people who should have entered a location like that. “Close to 40 people died as a result of this tragedy,” he said.