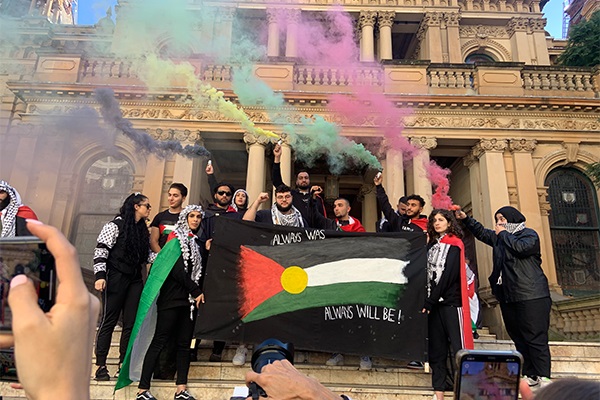 Yesterday, Palestine Action Group Sydney and Fighting in Solidarity Towards Treaties (FISTT) rallied in Town Hall in condemnation of the Nakba, the Israeli occupation of Gaza and the West Bank, and Israel’s almost forty-year-long campaign of displacement and genocide in the area. Particular emphasis was placed on the parallels between the ongoing colonial oppressions faced by Palestinians in Gaza and by First Nations peoples in Australia.

The rally was chaired by Lebanese and Gomeroi activist Tallulah Brown and Palestine Action Group organiser Assala Sayara. Sayara, born in the West Bank, spoke of her experience migrating to Australia and the realisation that it too was a colonial state.

“When I migrated to Australia, I had no idea I was leaving a stolen land and coming to another stolen land.”

Read the article by Alana Ramshaw in Honi Soit.