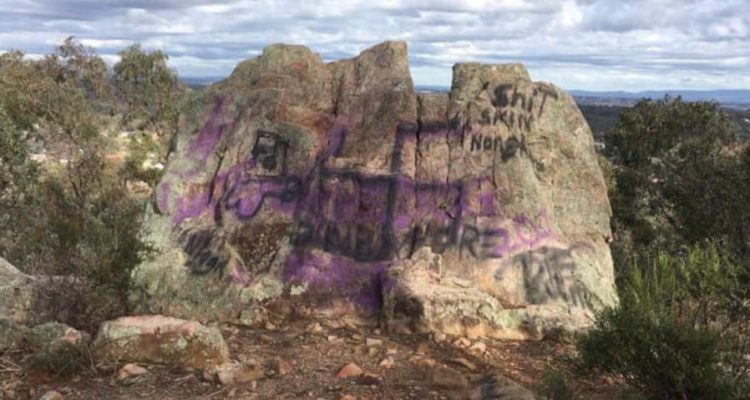 A small country town’s tourist attraction at Heathcote’s Viewing Rock Lookout has been vandalised with racist and anti-Semitic graffiti.

Heathcote’s Greg Gilmore said the lookout in the Heathcote-Graytown National Park was trashed on Friday June 4 by “hateful” graffiti including a large swastika and racist phrases including “s — t skin” and “n—-r”.

Nearby benches and seats had “F — k Jews” and “white power” sprayed on them in purple paint.

Mr Gilmore said the rocky outcrop 47km east of Bendigo was an “iconic” spot for the region that overlooked the township.

“People are pretty disgusted by it,” Mr Gilmore said.

Mr Gilmore said these symbols and racist phrases had no place in Australia.

“Whether they are anti-Semitic or racist or whatever, they’re hiding behind a tin of spray paint,” he said.

“People have got values. There’s still good people around Heathcote.”

Mr Gilmore said given Melbourne’s lockdown it was likely the offenders were from Heathcote.

“They knew what they were painting,” he said.

“Someone had tins of spray-paint in their car. It was deliberate.

“It was pretty poor form by whoever did it.”

Mr Gilmore said the racist graffiti on the rock-face could remain for some time but the benches would be painted as soon as possible.