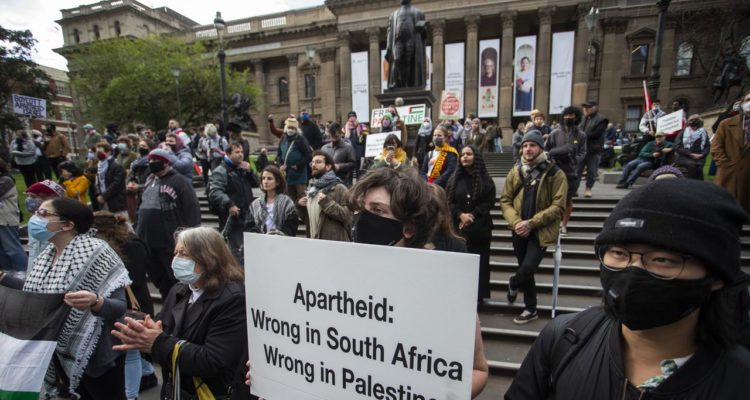 Hundreds of people have gathered for the third Pro-Palestine march in Melbourne’s CBD in two months, following the escalation of conflict in Gaza.

Hundreds of people have attended a Pro-Palestinian solidarity march in Melbourne’s CBD following the escalation of conflict in the Gaza Strip.

It is the third major rally in two months, after a May ceasefire between Israel and Palestine was broken.

Relations between the two countries have soured in recent months after a leadership row in Israel triggered a conflict, which deepened the historical feud between the two sides.

The Saturday afternoon rally had a heavy police presence, and featured speakers from Australia’s Pro-Palestinian movements.

Some protesters were draped in Palestinian flags while others held signs which read ‘boycott apartied Israel” and “stop Palestinian genocide”.

Protestors chanted “from the river to the sea, Palestine will be free!” and yelled “shame!” when speakers described life under Israeli occupation.

One speaker said her Palestinian mother was forced to leave the region decades ago due to the historical conflict and Israeli occupation.

“It has been 73 years, and my mother is still waiting and dreaming she will return.. and we will,” she said.

“We need to build and international movement…and not stop until the bombing of Gaza has stopped.”

Read the report by Mitch Ryan in the Herald Sun.