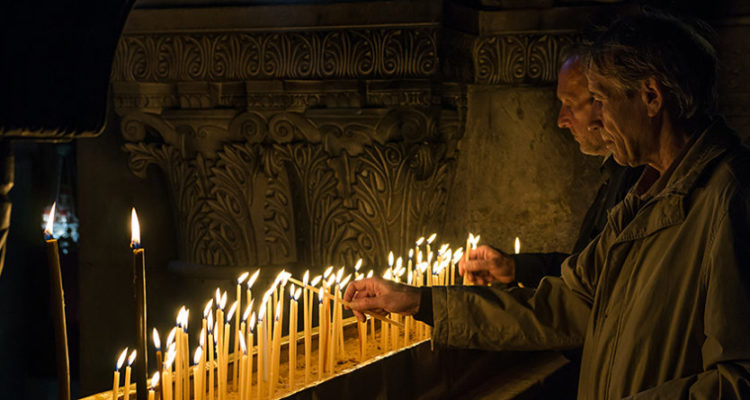 Arab Christians in the Holy Land

Fr. David Neuhaus, SJ, the superior of the Jesuit community in the Holy Land, has taught Scripture at Bethlehem University and at the seminary of the Latin Patriarchate of Jerusalem. He was the vicar for Hebrew-speaking Catholics of the patriarchate from 2009 to 2017, and served as its coordinator of pastoral care for migrants and asylum seekers. He earned his bachelor’s, master’s, and doctoral degrees in political science from Hebrew University, his licentiate in theology from Centre Sèvres in Paris, and his licentiate in sacred Scripture from the Pontifical Biblical Institute in Rome. The author of more than a dozen books and countless articles, Neuhaus is a frequent commentator on social and political issues facing present-day Israelis and Palestinians. His most recent book, in Arabic, is Judaism Evolved Among Us: An Introduction to Judaism for Christian Arabs (2019). He is currently involved in the formation of young Jesuits throughout the Middle East. His varied background (see below) gives him a wide perspective and unique insight into the problems afflicting Israel and the Palestinian territories. Nicholas Frankovich recently interviewed him by email; this interview has been edited for length and clarity.

NICHOLAS FRANKOVICH: You’re a Catholic priest in Jerusalem and serve as the Jesuit superior there. You’re fluent in both Hebrew and Arabic. And in the eyes of the Israeli government, you’re a Jewish Israeli. Please describe your background in more detail, if you would. How does it affect your perspective on the religious and political conflicts and tensions in the region?

DAVID NEUHAUS: I was born into a German Jewish family that found refuge in South Africa during the 1930s. The family was dispersed around the globe, and all those who did not leave Germany were exterminated by the Nazis. This is a very important part of my identity. Being born in South Africa during the horrific years of apartheid and spending the first fifteen years of my life there also marked me deeply. My family was strongly opposed to the regime and we were brought up with a strong sense of justice.

Attending an excellent private Jewish school, I received a fine Jewish and secular education, and learned Hebrew and love of the language and culture. Arriving in Jerusalem at the age of fifteen for the first time in 1977, I was determined to understand what was going on. My first lifelong friend there was a Muslim Palestinian Arab, and this was the incentive to learn Arabic, as his family became like an adopted family for me. In their midst, I learned not only Arabic but also Arab culture, and experienced Islam as a religious tradition within a family that was very traditional. This marked my perspective profoundly.

However, at the same young age, I was also exposed to Christianity. I met a radiant witness to Christ in the figure of an eighty-nine-year-old Russian Orthodox nun, and her witness was absolutely convincing. I promised my parents I would wait ten years before seeking baptism, and when I did, I was asked to discern for a further two years by the Church. I was finally baptised in 1988 as a Roman Catholic, and then waited an additional three years in order to enter the Society of Jesus.

During these long years I studied at Hebrew University, completing my PhD in 1991, which focused on the Palestinian Arabs who are citizens of the state of Israel. After eight years abroad in Jesuit formation, I returned to Jerusalem to teach Scripture in Catholic and Jewish institutions in 2000, the year in which I was ordained to the priesthood.

I have been serving in Jerusalem ever since. In 2009, I was named episcopal vicar for Hebrew-speaking Catholics and migrants in Israel and served in that function until 2017. I am now superior of the Jesuits in the Holy Land, and we maintain a presence in West Jerusalem (Israel) and Bethlehem (Palestine).

Read the interview with David Neuhaus, SJ by By Nicholas Frankovich in Catholic Outlook.