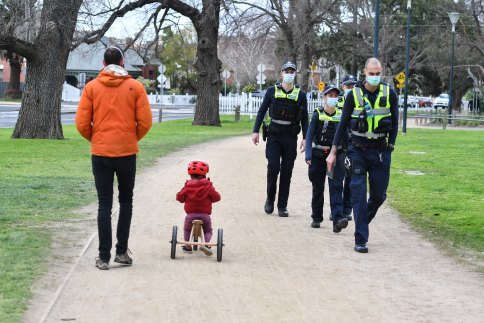 Premier Daniel Andrews called for people with even the slightest symptoms to come forward from Bayside, Glen Eira, and Port Phillip local government areas, pointing to the potential for further COVID-19 cases there.

State Health Department deputy secretary Kate Matson said authorities were concerned there were cases in these areas that they did not yet know about.

“The virus is circulating in those geographic areas of Melbourne. If you look at the exposure site map on our website, you can see 50-odd exposure sites running from South Melbourne down the bay, down to Brighton,” she said.

“The only thing they share is geographic proximity, they might live or work in the City of Glen Eira, or the City of Port Phillip.”

There have been five positive cases linked to the party in addition to the original positive case who attended.

Mr Andrews has stressed that the party attended by dozens of people in the state’s Jewish community last week was not a reflection on that community as a whole.

Read the article by Cassandra Morgan and Erin Pearson in The Age.